This print is representative of the edition of 31 produced for the Baren print Exchange #7 in October, 2000. Exchange #7 called for a chuban sized print in the theme of “The Comedy of Life”. You can visit the Baren site on the web. This print was intended to be somewhat comical. The fun, surprising, & sometimes frustrating thing about printing hanga is that the prints never turn out exactly as intended — maybe that is the most comical thing! I was originally thinking that the real comedy of life is that it doesn’t last long — we are born, and already the end is rushing upon us.

I was imagining images like ‘a pretty girl with skirt tossed by autumn breeze and skeleton clinging behind’, or ‘skeleton with gust-tossed skirt’, or traditional: ‘madonna with infant skeleton’. Not too light hearted, but kinda comical in a dark sort of way. then it seemed like dogs would be naturally more comical than girls and skeletons, and so easy to draw! With Halloween approaching, I wound up with another one of those doggie designs with no place for the eye to pause, the subject of my design going something like:

Originally, I planned to use sienna, ochre, an autumnal pallette, but wound up luxuriating in the play between veridian and magenta, and the edition examples kinda developed on its own during printing. I wish there were a better punch line, or story. The humor connection seems so weak (what in the world did I think was so comical about inevitable doom, anyway? The ghost dog in the middle of the print got kinda lost in the pale part of the print, so I enhanced it a bit with mica — this was the first time I have tried mica — it was way, way too easy!! I hope it stays glued down and doesn’t get all over the other prints in the suite! That wouldn’t be too funny, either! 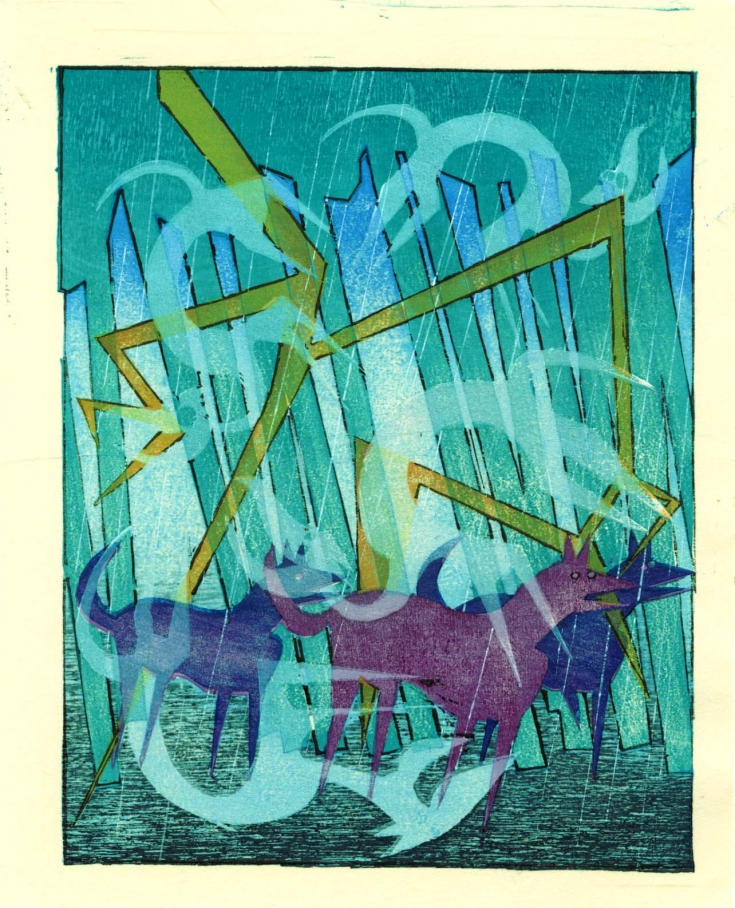