I was commissioned to design a meeting room at UMB Technology Center (UMB is a major regional bank). UMB named the room ‘Zen Garden’, and I’m told it’s the most popular place in the building. I made (with my own hands) everything in them room, including a table with six chairs, two large benches, two ceiling elements, two large windows (one of which appears behind me in the photo), a long cabinet, four framed photographs, two large wood block prints mounted as scrolls, and a low-relief sculpture. This project consumed me for a LONG while — started fall of 1999 and completed spring of 2000!

The moon window installed. Six precisely dimensioned window sections fit neatly into existing steel and glass construction. The window is a shoji-like padauk framework with translucent sanded plexi lights — the view of downtown Kansas City parking garages is eliminated but light streams in.  This window was the most difficult part of the project.  The round window frame was constructed of laminated padauk, glued up on large curved plywood forms to retain the proper dimension, then the mintons were all half-lapped into the frame and one another.  Quite challenging — no — super challenging!

The pattern of the wall outside the moon window is a birch grid into which hundreds of luan triangles in two colors have been installed in one of my favorite tile patterns.

I built two ceilings. The closest one is just an inch or two above the door and is an open grid of 2 inch squares in half-lapped birch. It is supported by a four inch square column which grows out of the tiled floor and joins the main ceiling which slopes from about 10 feet high near the entry to almost 12 feet high near the moon window. I built the main ceiling from a fir grid with padauk inlay into a grid of light-weight canvas panels onto which incandescent lights shine from above. This gives the room a beautiful soft glow in the evening. 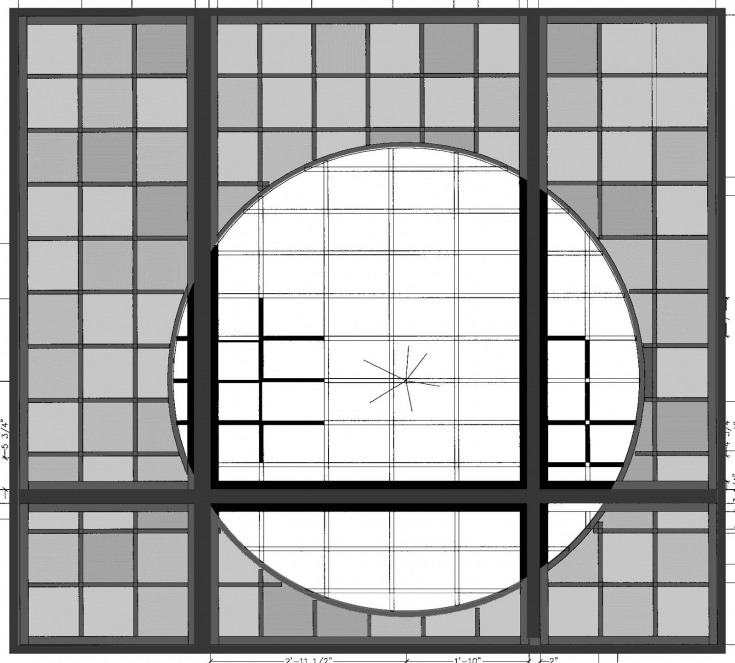 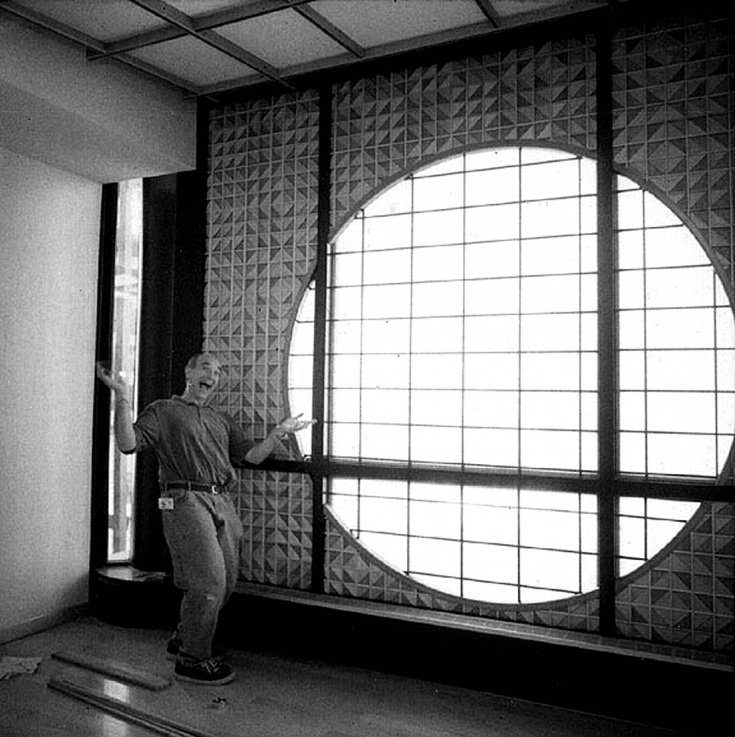 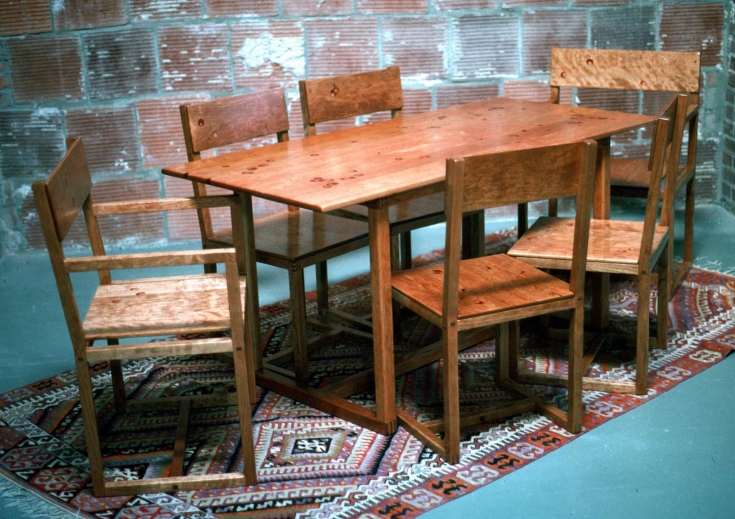 table and six chairs in workshop ready to deliver 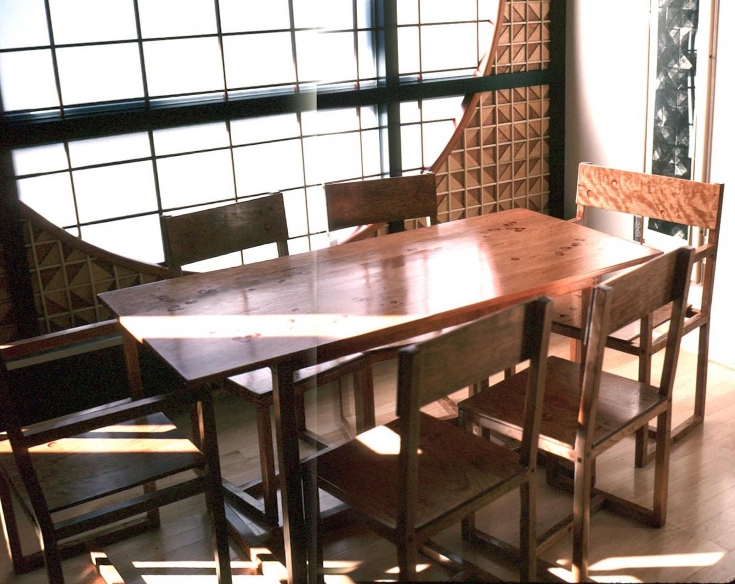 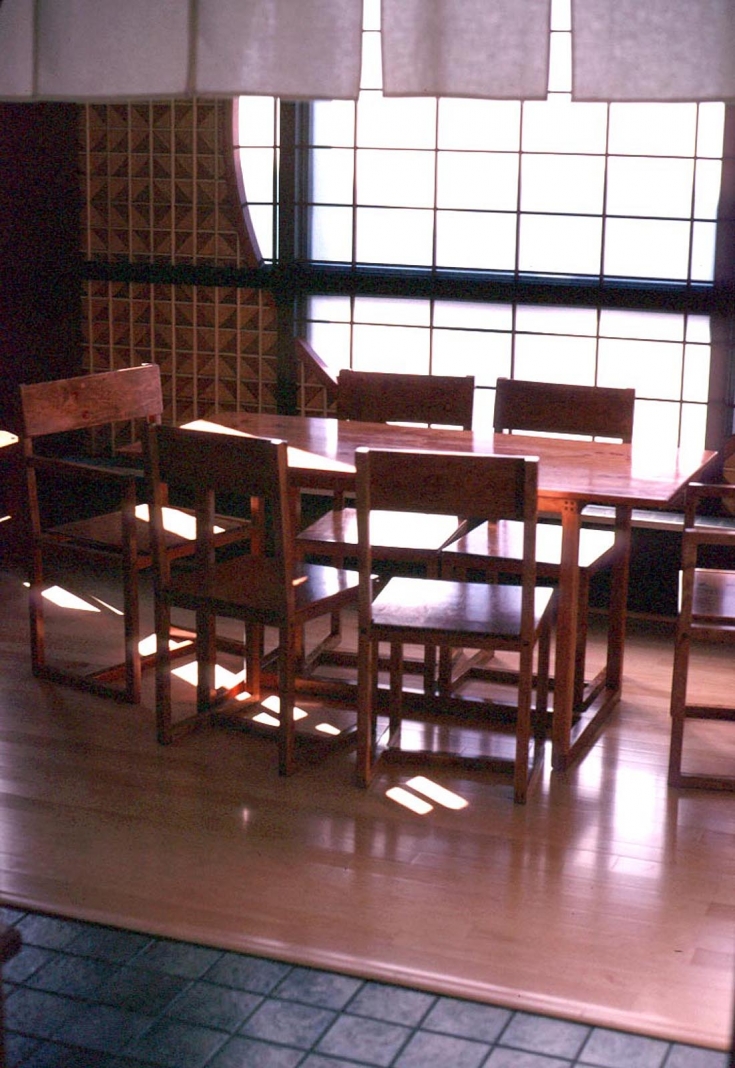 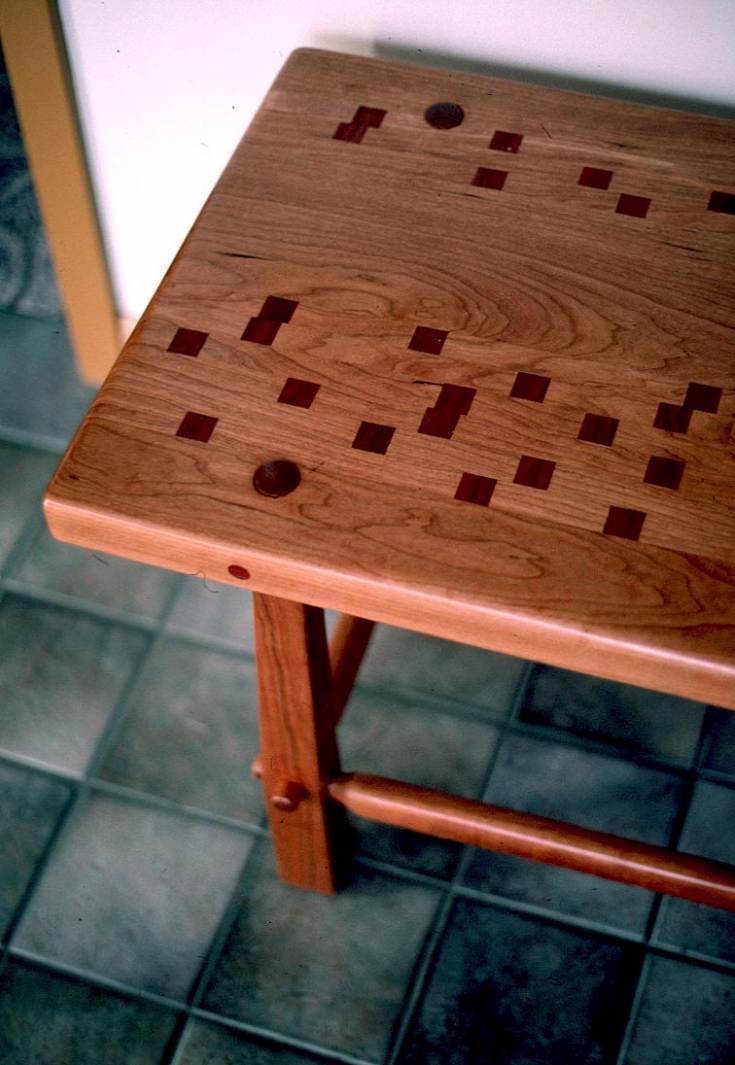 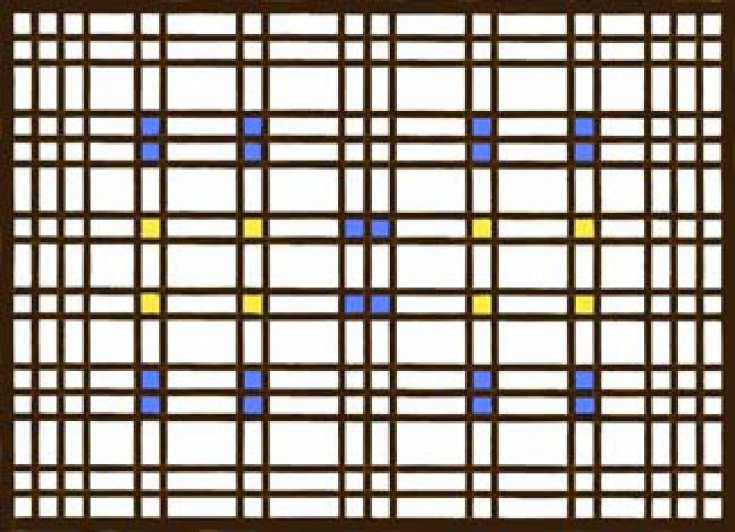 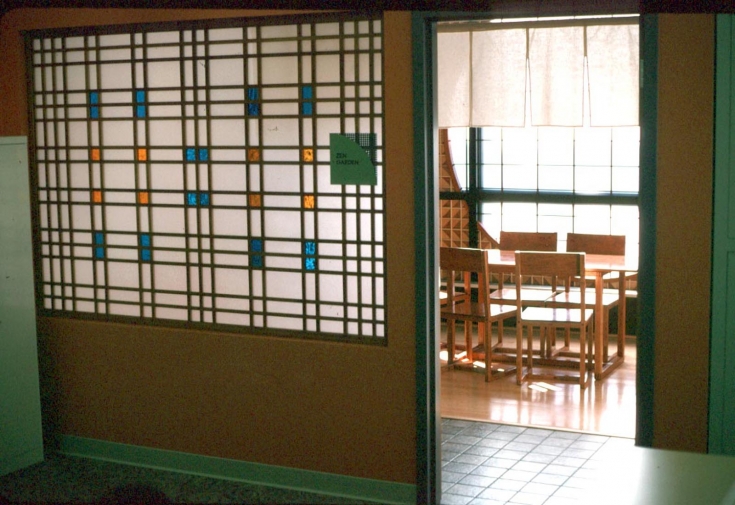 view into the completed room with interior window at left 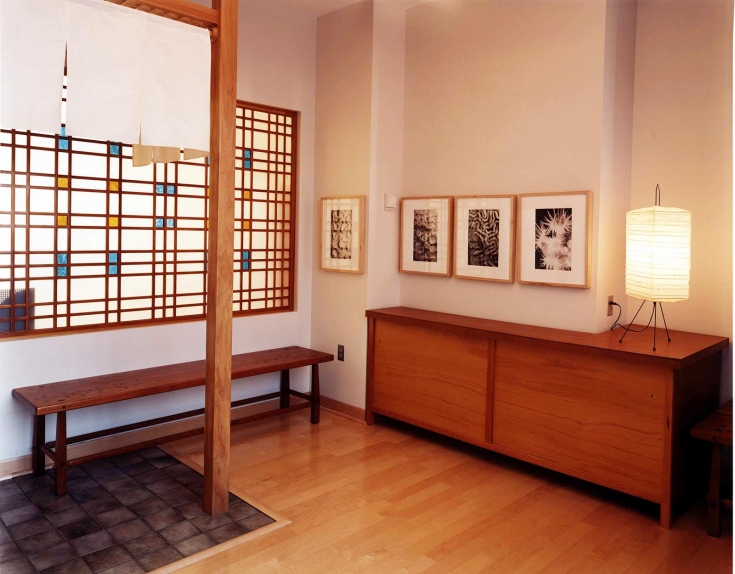 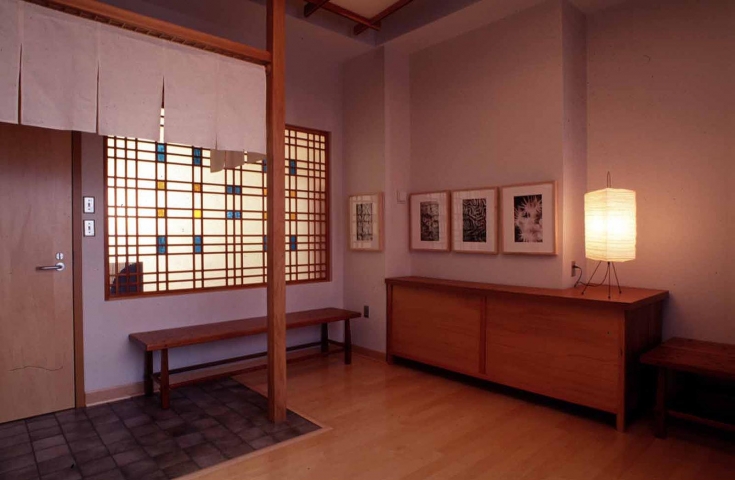 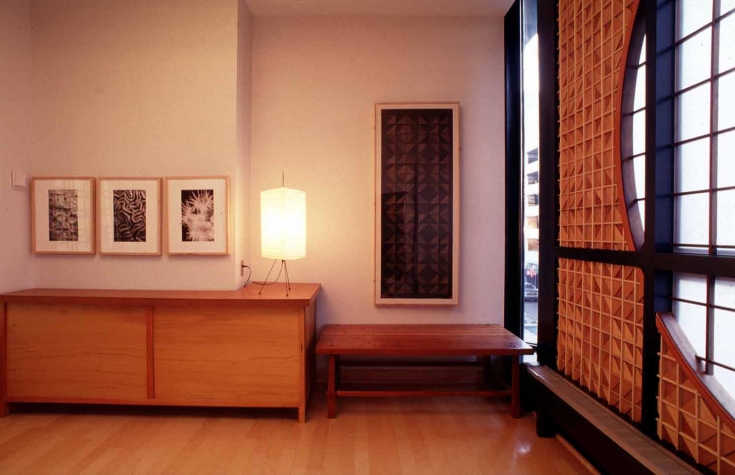 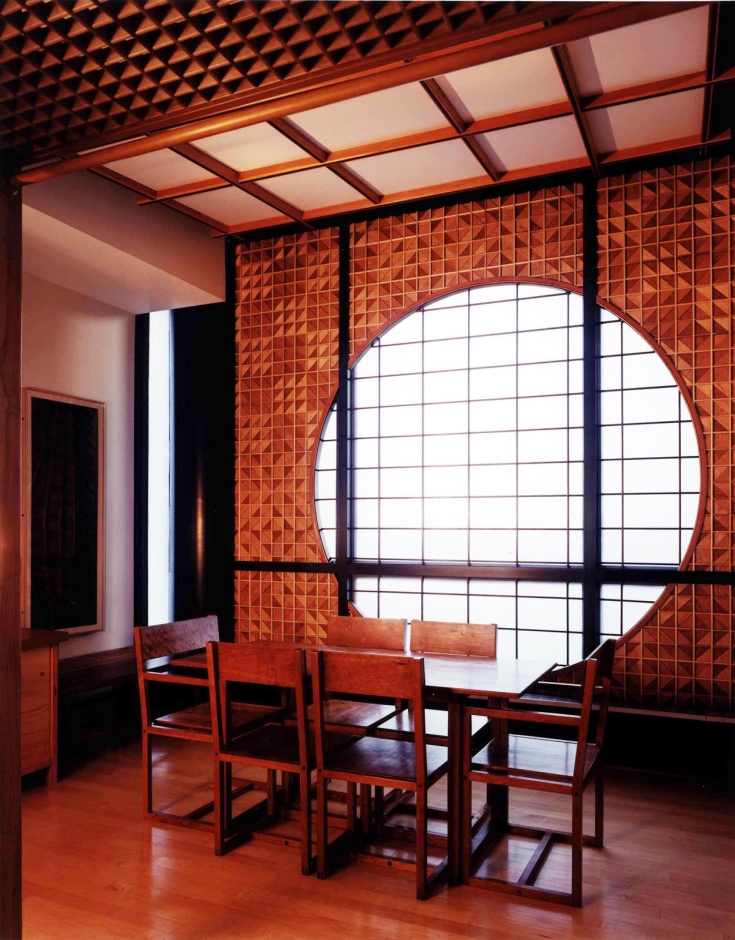