Traditional hanga technique. I carved eight blocks, four from shina plywood, and four from birch plywood. I used three Windsor/Newton watercolors, transparent yellow, quinacidrone magenta, prussian blue, plus prepared sumi and printed VERY dry on VERY lightweight kitakata paper. I wasn’t up to carving the tiny little words, so they were laser-printed prior to dampening the paper.

Thirty-nine people who believed their souls were destined to rendezvous with angels in a spacecraft travelling behind the Hale-Bopp comet committed suicide in late March of 1997. Their bodies were found in a rented mansion in an exclusive suburb 20 miles north of San Diego. The 21 women and 18 men, aged between 20 and 72, were lying neatly on their backs ‘as if asleep’, their upper bodies covered in triangular purple shrouds.

My endangered species print is a portrait of the group’s spiritual leader, Marshall Applewhite. In the background are angels as depicted in the group’s website, and Applewhite (whose name I somehow managed to mis-spell!) is quoted in a cartouche in the upper right. We are all going to die soon enough. Why rush it? I say, “let’s enjoy the ride!” 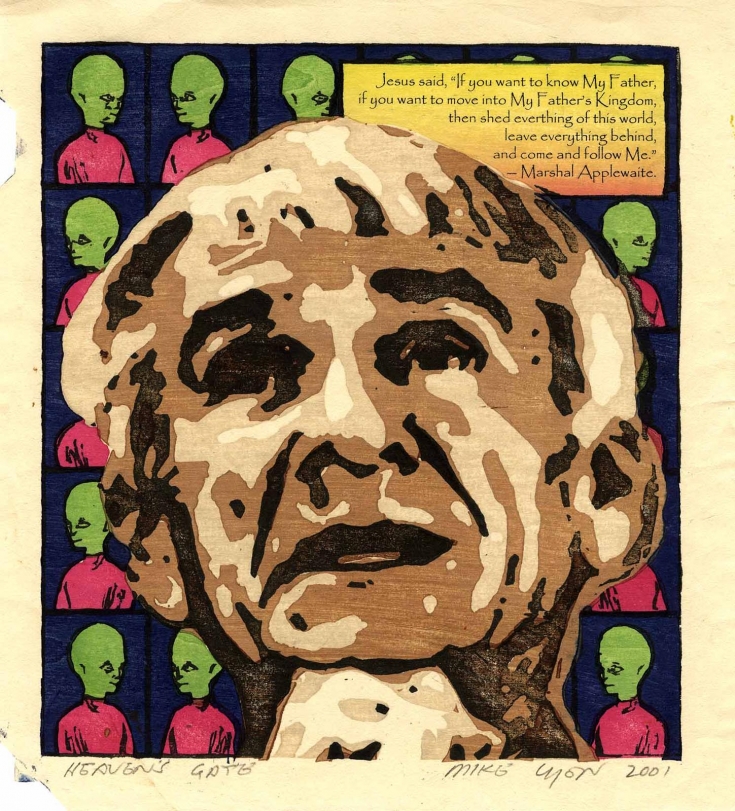