This is a print I produced for Baren Forum‘s 14th Exchange. This version included an additional block carved from oak which I used to print the ‘wood grain’ in the background. The print is o-ban (large size — about 15 inches high) on hand made, unsized gampi paper.

This is a reduction print, printed by hand using Traditional Japanese woodblock printing techniques and materials (except, of course for the reduction part). Traditionally, each of the 26 blocks for this print would have been carved by hand from separate pieces of wood. But in order to save time and material and increase risk, I carved only three blocks — one to lay down an embossing for the background, one to print wood grain in the background, and the last one to print the 24 tones of the image. So each of the 52 sheets of paper was printed at least 25 times (but not all papers received the wood grain). For the various shades of blue which make up the print, I’d carve a bit, print each sheet, carve a bit more, print each sheet again a little darker, etc, etc, etc. twenty-four times! 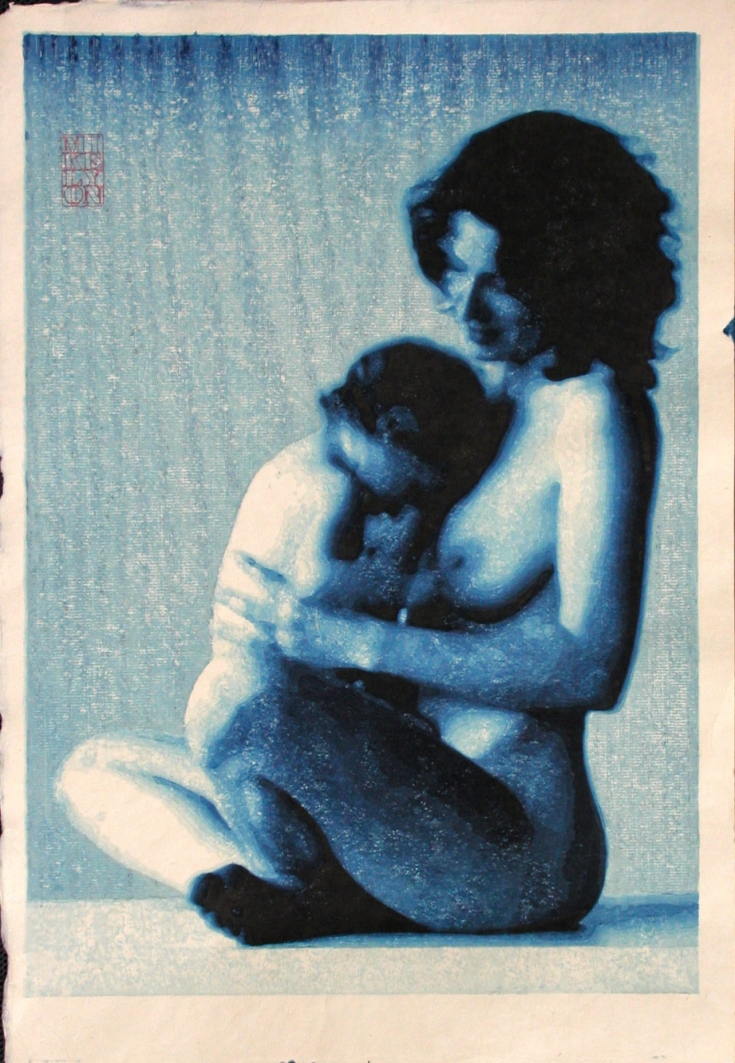 For the first time, in addition to the beautiful prints he produces, Mr. Bull has included an entirely new section, “David’s Choice”, consisting of 8 interesting and beautiful prints selected from his own personal collection.

I was delighted when I learned that he had included my print among the eight selected from his personal collection. Mr. Bull wrote the following description to accompany the print (translated from the original Japanese):

Out of all the woodblock prints you see in the gallery today, this is the only one that was carved and printed by the same person who designed it. It is an excellent example of a synthesis of western and tradtional Japanese woodblock techniques. The paper is washi, and the way of applying the pigment is the standard Japanese brush and baren method, but the way that the block was carved is completely alien to the Japanese tradition.

This is a reduction print – so named because it is made from a single block that becomes reduced in size as printing progresses. A full block covering the entire area of the image was first printed with the lightest pigment in the print. Enough sheets to make up the entire edition were printed this way (Mr. Lyon used about 50 sheets). Then a portion of the block was cut away… This procedure was repeated 24 times, ending with a very small block and a very dark pigment.

Because the block is destroyed during the process of printing a reduction print, no more copies can ever be produced, another major difference from the Japanese tradition in which blocks were used and reused many times, as long as there was a demand for the print.

Stand back a bit and look at this picture – you will hardly believe that it is a woodblock print!

Acquired: gift from the artist