This was a ‘rush’ job for Baren Exchange #18 — someone actually had the cajones to drop out over one month AFTER the exchange deadline, and I was the next one on the waiting list. So I said, “give me a week.” and it’s been six days, so 31 of these go in the mail tomorrow! I’d been intending to print a woodcut of this snow scene in Aspen, Colorado near my parents’ home for a long time, but I never imagined making it so small — the image is only about 2 1/2 inches wide! I carved a single plank of cherry wood with my tiniest little tools and used eight colors, printing darker and darker as I reduced the block each time I’d printed all the papers. 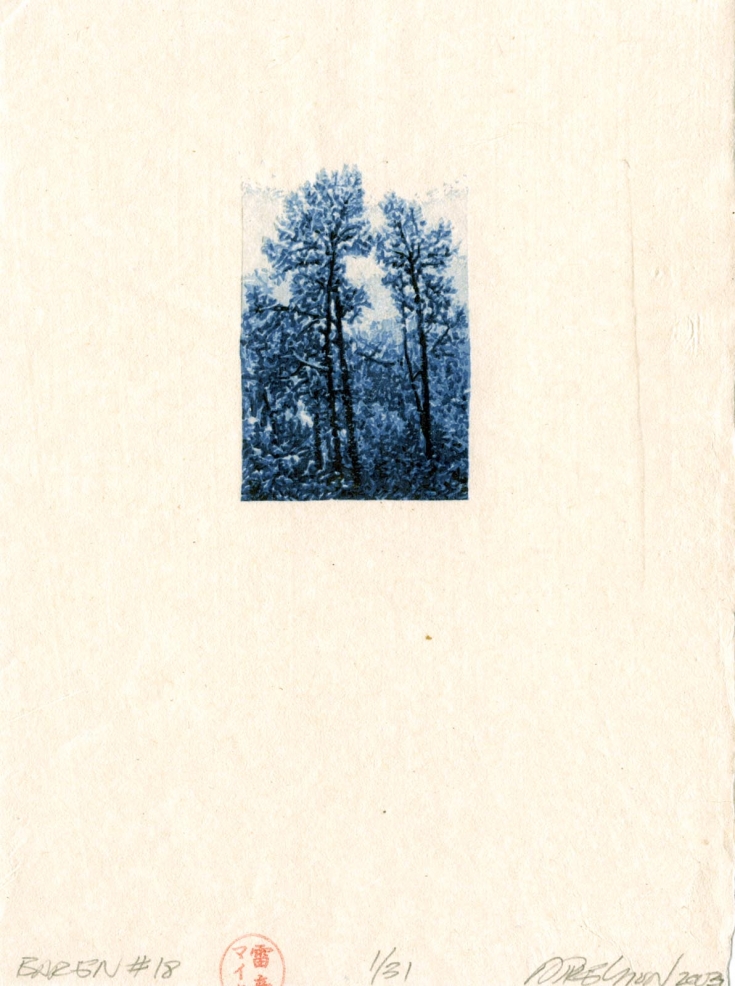 They’re printed on Nishinouchi paper from McClain’s.  Nishinouchi is a relatively thin washi for printmaking and is not the highest quality. It has a lot of variation in thickness over each sheet and a lot of clumps and impurities and the sizing is applied in a sloppy manner with many missed spots, especially around the edges. But it’s relatively inexpensive and strong enough to hold up to several over-printings if you’re very careful. I did lose two prints to holes where the paper just gave up the ghost in the darker areas.

Pigment is Prussian Blue pigment suspension and sumi, both from Daniel Smith mixed into a little home-brewed rice paste I cooked up from Lineco, Inc Neutral pH Pure Rice Starch (McClain’s now has some nice Japanese rice starch, too). I jury rigged a primitive sort of double boiler from my hot water pot heating some boiling water and into the shallow boiling water went a Pyrex cup containing of a couple teaspoons of rice starch in a half a cup of water. I stirred the paste mixture occasionally while heating until it became hot, clear, and thick. Then I cooled it and added a good amount of formalin (enough to make my eyes water a little) and the paste has kept well at room temperature in a sealed jar for a month. Without the formalin you’d want to make a fresh batch daily.