The emotion in Mike Lyon’s artwork is inspired by old Japanese prints. The shapes are determined by the contours of the faces of his closest friends, friendly strangers, and the outcome hinges on the mechanics of his latest digital tools.

“Figuring it out: Prints and drawings by Mike Lyon” is on display until July 18 at the Beach Museum of Art.

Bill North, senior curator at the museum, said though Lyon has always had an artist’s touch and studied art in college, he got his start when he went to work in Kansas City, Mo., for his family’s cattle hide processing business in 1976. While working there, Lyon invented a computerized system that made it faster and easier for the workers grading cattle hides. His idea was wildly successful, and Lyon was able to sell his new machine and go to work as an artist full time.

This type of automation and machinery play a large role in Lyon’s work, along with a taste for Japanese print work, North said. Lyon has a collection of nearly 2,000 Japanese prints.

“One thing that really attracted me to his work is that few artists are using digital technology in a responsible and judicious way,” North said. “This marriage of Western and Eastern traditions and ways is so fascinating.” 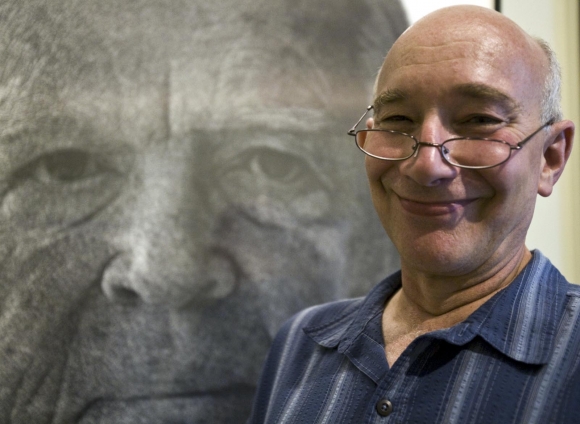 At the entrance to Lyon’s gallery at the Beach Museum, five oversized faces stare out, full of ambiguous emotion, each wrinkle and hair clearly defined in a maze of ink squiggles and geometric shapes.

Lyon said he starts his process by having the model for each piece come in to his Kansas City studio, where he takes hundreds of photos of their face. He then spends several weeks painstakingly selecting the perfect photo to turn into a print piece.

“Most people don’t look like art,” he said. “But the right image — I know it when I see it, it’s just the aesthetics, I can’t explain it.”

He then programs a machine called the ShopBot with data converted from the digital photographic files to trace the image with a simple ink pen. The files tell the machine how far to move the pen along X, Y and Z axes for each bit of the piece. Lyon said this process is long and tedious and requires him to watch the machine to replace the pens when they run out and make sure the thick paper he prints on stays in place.

Lyon said he has been criticized for using technology so prominently in his work, but he feels that it takes just as much artistry to create his own computer programs and machines to make his pieces come to life.

“My ideas and my blocks and my shapes and my designs are not done by a computer,” Lyon said. “That comes from me, from my mind, and then I just make it happen, whether it’s my hand on the pen or my machine — just another tool.”

“Linda,” a featured piece in the gallery, is one Lyon printed of his wife, Linda Lyon. According to research compiled by North, this piece is 77-by-46 inches and took more than 12 million lines of code and 11 days of continuous drawing on the ShopBot.

Linda said she enjoyed posing for Mike because it gave her a chance to see him work.

“I never know how he is going to do something!” Linda said, laughing. “Every piece just turns out to be his own blend of the thoughts in his head.”