Erik Brunvand invited me to join him, Steve Hoskins, and Ed Bateman on a panel during Southern Graphics Council’s Chicago convention  called Printmaking with Extreme Technology. Each of us spoke for approximately 15 minutes.

Printmaking is an art form that celebrates and embraces new technology in a way that other media do not. This panel gathers an international group of artists that are using extreme technology to make works that can only be called prints, but that are far removed from traditional printmaking techniques. These techniques include printing on silicon chips with image sizes measured in micrometers (millionths of meters), prints that include LEDs and other electrical components, 3D printing where the result is a solid object, the use of 3D computer modeling tools to create virtual worlds that are then printed digitally, and a wide variety of ways to use CNC routing in the printmaking process. 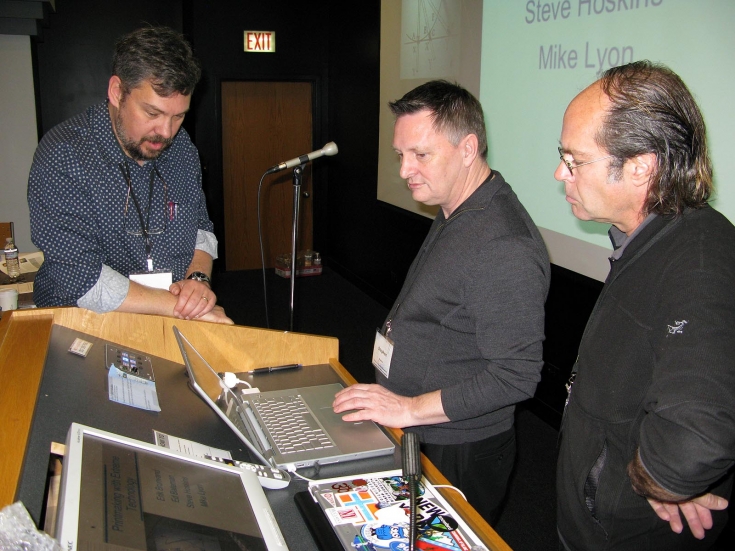 The auditorium begins to fill 20 minutes prior to our talk - once underway, every seat was filled and people were in the aisles along both walls.

There were 120 – 140 in the audience when Erik introduced our panel and we got underway.

Ed Bateman is an assistant professor of art at the University of Utah and a working artist.  He described 3D modeling, adding skins with texture and color to wireframes, ray tracing, and sometimes days-long output to printing equipment.

Stephen Hoskins is the Hewlett Packard Professor of Fine Print and Director of the Centre for Fine Print Research at the University of the West of England in Bristol, UK and Vice-President of the Royal Society of Painter Printmakers.  Steve talked about his work in rapid prototyping with binder and powders (including firable ceramic powders ‘printed’ on his equipment), and showed some colorful nested models he’s produced.

Erik Brunvand is Associate Professor in the School of Computing at the University of Utah in Salt Lake City, Utah.  He teaches chip design and described the process of printing transistors and capacitors in layers on silicon wafers.  He showed some of the colorful images he’s ‘printed’ microscopically in empty areas of some of the  micro-chips he designs.

Our talks seemed to be enthusiastically received and there was time for 30 minutes of questions and answers.  VERY FUN!