Rebecca Miller (director of the Pool Art Center Gallery)  and I first met about twenty years ago while she was a student at the Kansas City Art Institute.  I was teaching karate twice a week there and she was one of my better students.  During the several years she practiced with me,  we became good friends and have remained in occasional touch, so I knew she’d joined the faculty at Drury (now she’s a tenured professor of photography) but I was still shocked when she invited me  to show my work at the Pool Center Art Gallery there during March, 2010.

It was a fairly large show and very fun to hang (and hang with her again)!  Rebecca organized the images in an interesting way — boys on one side, girls on the other!  It made a whacky sort of sense to me!

When I arrived for the opening, Rebecca had arranged for Camille Dautrich (writer for Springfield’s News Leader paper) to interview me which was pretty fun, though I’m no expert at that sort of thing.  Then I presented an hour-long lecture copiously illustrated with slides and video and THAT was a blast!  Maybe 30 faculty and students were present, they had lots of interesting questions and comments, and I felt it had all gone very well.  Several arts faculty took us to a great dinner (Linda and my daughter, Allegra, were with me) and, exhausted and a little drunk, I slept most of the way home while Linda drove.  Very satisfying event!

Here’s a short video walk-through of the exhibition: 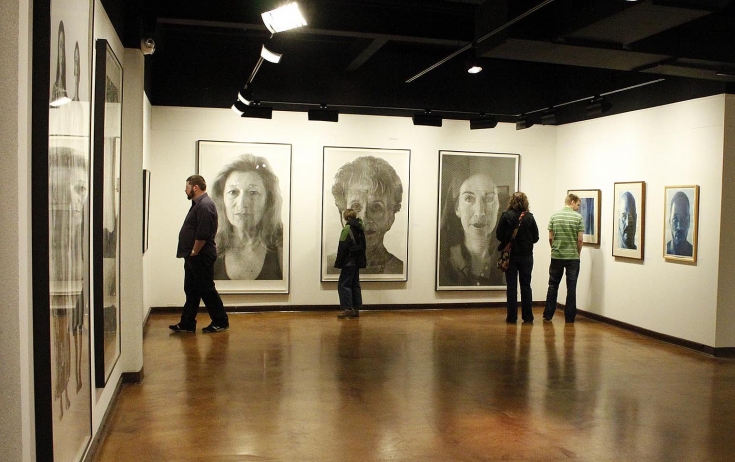 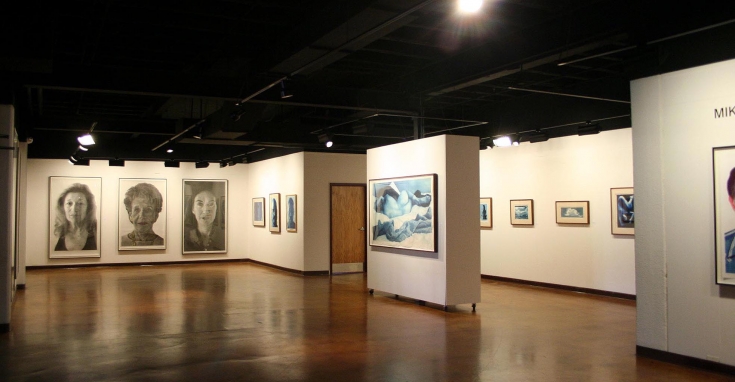 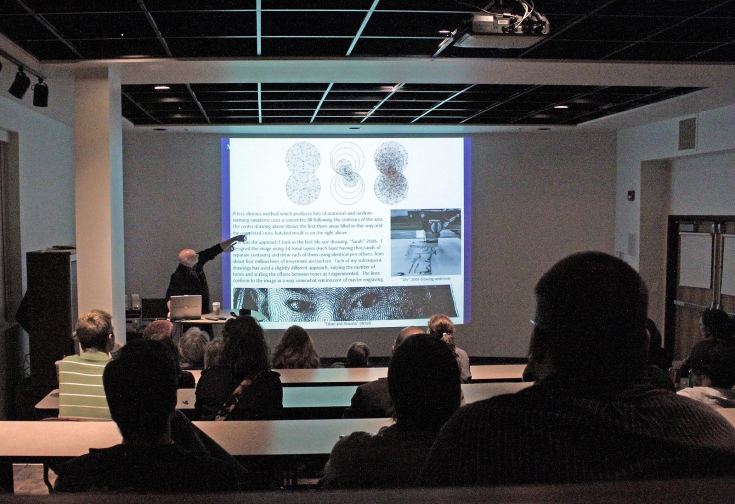 This review appeared in the Springfield News Leader: 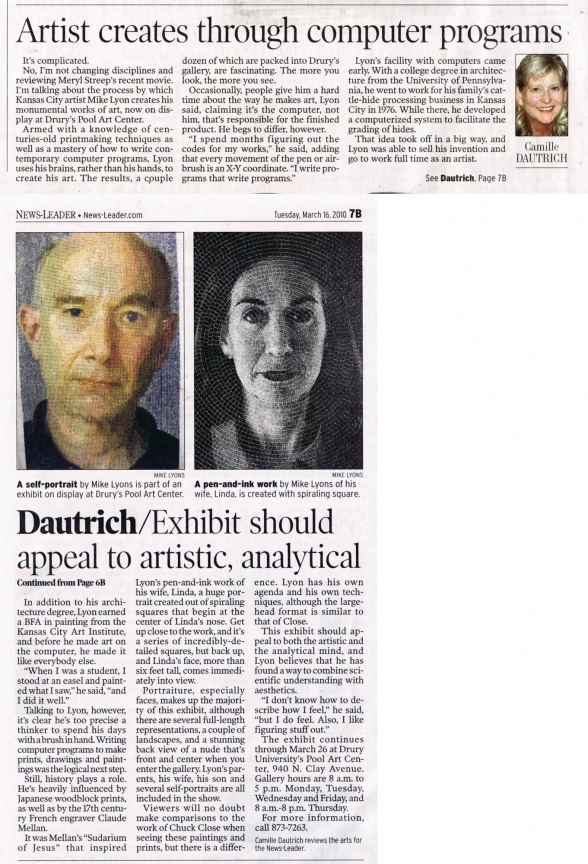 Armed with a knowledge of centuries- old printmaking techniques as well as a mastery of how to write contemporary computer programs, Lyon uses his brains, rather than his hands, to create his art. The results, a qmple dozen of which are packed into Drury’s gallery, are fascinating. The more you look, the more you see.

Occasionally, people give him a hard time about the way he makes art, Lyon said, claiming it’s the computer, not him, that’s responsible for the finished product. He begs to differ, however.

“I spend months figuring out the codes for my works,” he said, adding that every movement of the pen or airbrush is an X-Y coordinate. “I write programs that write programs.”

Lyon’s facility with computers came early. With a college degree in architecture from the University of Pennsylvania, he went to work for his family’s cattle- hide processing business in Kansas City in 1976. While there, he developed a computerized system to facilitate the grading of hides.

That idea took off in a big way, and Lyon was able to sell his invention and go to work full time as an artist. 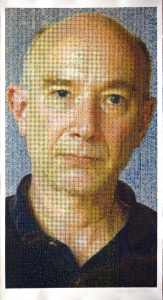 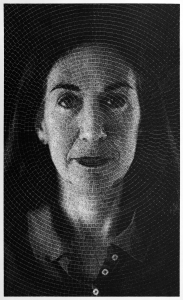 Dautrich/Exhibit should appeal to artistic, analytical

In addition to his architecture degree, Lyon earned a BFA in painting from the Kansas City Art Institute, and before he made art on the computer, he made it like everybody else.

“When I was a student, I stood at an easel and painted what I saw,” he said, “and I did it well.”

Talking to Lyon, however, it’s clear he’s too precise a thinker to spend his days with a brush in hand. Writing computer programs to make prints, drawings and paintings was the logical next step.

It was Mellan’s “Sudarium of Jesus” that inspired Lyon’s pen-and-ink work of his wife, Linda, a huge portrait created out of spiraling squares that begin at the center of Linda’s nose. Get up close to the work, and it’s a series of incredibly-detailed squares, but back up, and Linda’s face, more than six feet tall, comes immediately into view.

Portraiture, especially faces, makes up the majority of this exhibit, although there are several full-length representations, a couple of landscapes, and a stunning back view of a nude that’s front and center when you enter the gallery. Lyon’s parents, his wife, his son and several self-portraits are all included in the show.

Viewers will no doubt make comparisons to the work of Chuck Close when seeing these paintings and prints, but there is a difference. Lyon has his own agenda and his own techniques, although the largehead format is similar to that of Close.

This exhibit should appeal to both the artistic and the analytical mind, and Lyon believes that he has found a way to combine scientific understanding with aesthetics.

“I don’t know how to describe how I feel,” he said, “but I do feel. Also, I like figuring stuff out.”

Camille Dautrich reviews the arts for the News-Leader.