The following review appeared in the scholarly London journal,  PRINT QUARTERLY and has been reproduced with permission: 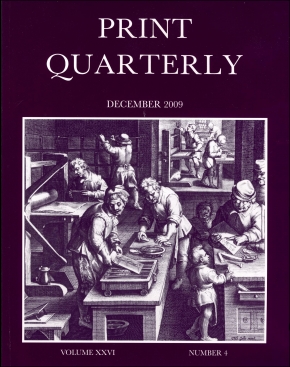 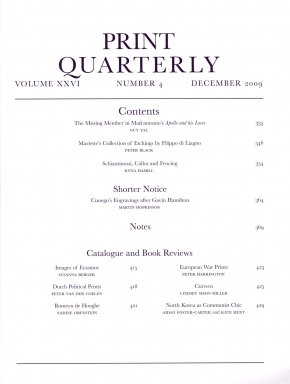 MIKE LYON. For various reasons, very modest exhibition catalogues are sometimes worth noting in Print Quarterly. This is the case with Figuring it Out: Prints and Drawings by Mike Lyon (Manhattan, KS, Marianna Kistler Beach Museum of Art, Kansas State University, 2009, 8 pp., 10 col. ills., free), which includes an essay by Bill North. For this photorealist printmaker has made use of his knowledge of computerized technology to create a series of digitally based colour woodcuts. Mike Lyon studied at the University of Pennsylvania and the Kansas City Art Institute before going to work in [976 in his family’s cattle-hide processing business. There he invented a computerized system to automate the process of grading cattle hides. This led him to set up a successful computer hardware and software design business, which specialized in providing warehouses with a computerized system for automating orders. In 1991 Lyon sold the company and became a full-time artist. A great admirer of Japanese aesthetics and printmaking and an avid collector of ukiyo-e prints, he taught Japanese woodblock techniques at the Center for Contemporary Printmaking in Norwalk, Connecticut. He based the designs for his own woodcuts on photographs. Lyon used Prussian Blue ink similar to that used in aizuri-e woodcuts and followed Japanese methods in printing. Rather than printing from multiple blocks, however, he used a single block, reprinting it to achieve the results that he desired by the reduction woodcut method.

In 2004 Lyon decided to use his knowledge of computers to further his art, acquiring a ShopBot CNC (computer numerically controlled router) designed for woodworking applications. As North describes, he adapted the machine to carve his blocks. The first woodcut that Lyon printed using the ShopBot was carved from fifteen separate cherry plywood blocks, although he maintained his approach to the work conceptually as a reduction woodcut. This print of a full frontal head close to the picture plane bears similarity to some of the works of Chuck Close. More recently Lyon has created a large-scale print of a reclining nude, using paper especially made for him by Iwano Ichibei. To print it, he designed and made his own printing press with a five-by-ten feet bed, and adapted the elements of an electric garage door to act as a drawer, which cantilevers over the bed laying the paper on the block as the drawer retracts. Lyon has also used the machine to create immense photographically based pen and ink drawings.

The exhibition also included eighteen Japanese woodblock prints from the artist’s own collection. Dating from between c. 1767 and 1928, these were chiefly of actors and beautiful women, the two illustrated in the catalogue being expressive close-up facial portraits. Cori Sherman North provides a brief description of ukiyo-e prints to accompany them. MARTIN HOPKINSON