Raechell Smith is chief curator and director of the Bloch Art Space at the Kansas City Art Institute.  She wrote the following essay for the printed catalog of The Kansas City Collection, an eighteen month rotating exhibition of work by 15 artists selected from over 60 nominations.

Mike Lyon earned a BA from the University of Pennsylvania and a BFA from the Kansas City Art Institute. He lives in Kansas City.

Lyon describes himself as an experimenter, an artist, a scientist, and an engineer. He is also an art collector, an inventor, an entrepreneur, a musician, an athlete (he holds a fourth degree black belt in Shotokan Karate), and a sensei (teaching karate at his downtown “dojo” for martial arts).

Prior to devoting himself full time to making art in 1992, Lyon was involved in his family’s business and the founder of a computer hardware and software design company that designed systems for automating production and manufacturing. While in business, he applied his curiosity, creativity, and talent for invention to design and implement systems for efficiency. Now, he translates his business acumen, knowledge of production, and ongoing exploration of new tools and technologies into his art making.

His love of Zen, Japanese art and culture is a constant source of inspiration. An impressive collection of ukiyo-e, Japanese woodblock prints, includes many so-called “big-head” portraits, or o-kubi-e, where the face is depicted from close range and fills the frame of the picture. Lyon has studied these works and Japanese woodblock printing technique, distilling elements into his own photo-realist figure studies and large-scale portraits of family members, friends, acquaintances, and even students.

At close range, Lyon’s images reveal a surprising surface made up of small parts and convey the artist’s fascination with both how an image is constructed and the multiple methods that can be used to create an image. Many of the methods used to create these images have been invented or largely adapted by Lyon from different applications. Portraits such as Anthony, Annette, Peregrine, and Jim begin with a digital photograph that is then converted into a format that can be read by a CNC (computer numerically controlled) router, with programs written by Lyon for precisely this purpose. The CNC’s plotter is custom-fitted with jigs, also designed and fabricated by the artist. to hold the ink pens, brushes or carving tools used to mark the surface of the paper or woodblock and create the image, either in a drawing or a print. 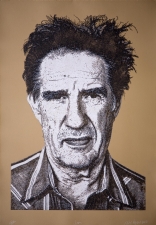 Lyon says he loves looking at people; their faces and expressions hold his interest. This is evident in his work, as is his ongoing exploration and invention of tools and techniques used for creating an image through drawing or printmaking. As you view and consider these portraits of Kansas Citians from all walks of life, greet them with an awareness and appreciation of the many years of study, experimentation, invention, and mark-making that bring them so vividly to life.