For my 61st birthday in June of 2012, my mother-in-law treated my family and me to dinner at the fabulous Rieger Hotel Restaurant. We were seated by a very tall and slender (and gorgeous) hostess who was showing a lot of tattoo ink. I said I would love for her to model for me and gave her my contact information. Then we all enjoyed drinks and a wonderful dinner.

A few weeks later, Jill contacted me to say she’d checked me out and wanted to model. Eventually, we were able to figure out a good time for both of us and we spent a couple of hours together talking and photographing and modeling.  It was months before I felt confident about how to treat the photos. One approach I liked was to position a front image and a back image side by side as I’d done a few months earlier (here). This time, I composed her in two very similar front views. In Japan, temples are guarded by shishi (lion dogs) or warriors – typically one of them has an open mouth and the other a closed mouth, as if one says あ (a or ah – the first letter in Japanese) and the other says ん (n – the last letter), symbolizing the alpha and omega (infinity). In my case, one of the figures appears to be saying something beginning with the letter F, and the other is giggling about it.  I like that.

This was another experiment – as with Addy and Arthur, I started out by painting the entire sheet neutral gray. Next I drew on top of the painting in white, pretty heavily filling in the lightest two-thirds of the values of the figures without regard to color. Then I drew over the white (and gray of the painted paper) in yellow, red, blue, and black, and then more in white (but forming the layers of white differently than the first time.) 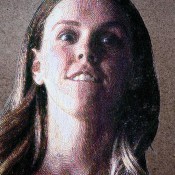 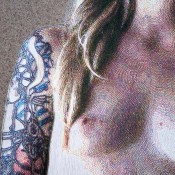 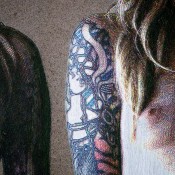 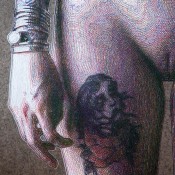 Detail of hand and thigh 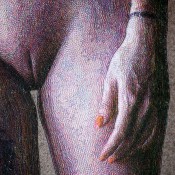 detail of hand and thigh