After Mom died, Dad moved back to Kansas City from Aspen where he’d lived since the late 1970’s. He invited several of his old friends to join him at my studio and then lunch at the vegan restaurant across the street, Cafe Gratitude. Morton Sosland is one of those old friends and joined us at studio and lunch. He was inducted into the Baking Hall of Fame in 2006 after having devoted his many decades long career to reporting, studying and analyzing the global grain-based foods industry. As chairman of Sosland Publishing Company and Editor-in-Chief of Milling and Baking News and World Grain, he has been a constant advocate for the maintenance of high-level wheat production and the recognition of the importance of the American baking and food industry. I was seated next to Morton as our waitress described their many “gluten free” menu items and, each time she recited “gluten free,” Mortan groaned audibly and complained about the anti-gluten craze of the day. He was hilariously grumpy and outspoken and I got a huge kick out of our conversation throughout lunch.

In spite of our gluten-free luncheon, Morton liked my work and several months later he asked me to make a portrait of him and his wife, Estelle.

The Soslands have collected Native American and other indiginous peoples’ art for many years and have been trustees and major patrons of the Nelson Atkins Museum of Art for years.

We made a date and they came to my studio and sat while I took hundreds of photos of them. A very pleasant hour or a bit more chatting about all kinds of stuff. I spent a couple of days going through the photos and identified a number of good images of each, but none which really stood out as ‘art’ of both of them. I wound up editing a composite image from several photos which I then used as the source for this very large (almost 27 square feet) drawing. I used a mixture of wallpaper paste and acrylic medium to mount a sheet of fairly lightweight paper to a panel I’d built positioning the paper so it extended an inch or two beyond the panel all the way around – then I programmed my drawing layers to each extended beyond the edge of the panel by about an eighth of an inch in order to support the pen as it drew slightly beyond the edge of the panel. I drew in blue, red, yellow (which I stopped quite early in the drawing as it was going down in a very opaque and unappealing way, white, and black. 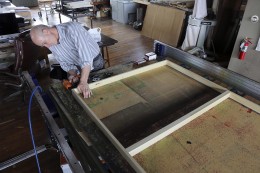 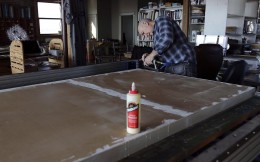 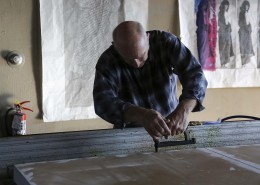 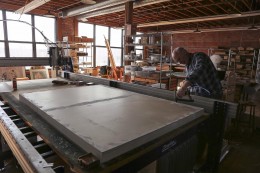 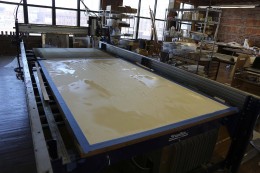 stretching dampened paper prior to gluing to panel 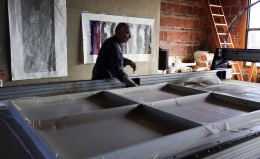 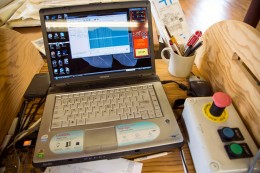 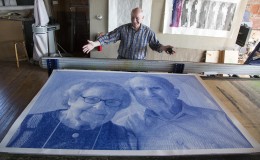 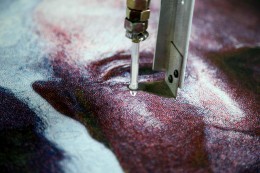 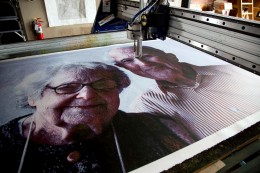 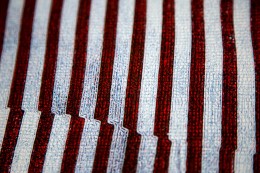 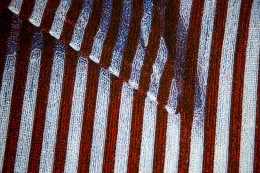 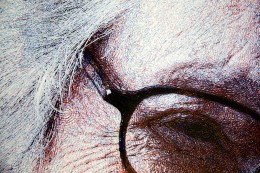 Once the drawing was completed to my satisfaction, I trimmed the paper flush with the edge of the panel and then added wood stripping in order to protect the paper edge from being damaged during handling. I also applied Damar varnish over the drawing which made the colors ‘pop’ just as with an oil painting. The varnish also ought to allow the Soslands to (gently) dust the surface from time to time with a damp cloth.

Once I’d hung the drawing in their living room, Morton and Estelle were so delighted that they commissioned me to make three smaller portraits of the same image which they gave as gifts to their three children. I made four smaller drawings using 5 to 7 colors and they chose the three they liked best (#s 2-4).