Although the Kansas City, Mo.-based artist does work with traditional art materials and techniques of printmaking and graphic design, he has developed a way to create original work through the use of automated machine tools and digital technology from the realm of industrial manufacturing.

Through this hybrid process of image-making, Lyon has become a pioneering figure in the emerging field of what is called post-digital printmaking and graphics. The techniques Lyon uses to create his prints are so new that the first book on the subject of post-digital printmaking, published in 2012, devotes an entire chapter to Lyon’s work. 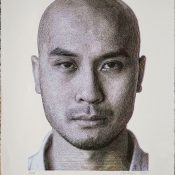 “Dinh” is a pen and ink work by Mike Lyon drawn in five colors – black, blue, red, yellow, and white – on an untinted sheet of paper, working wfrom darkest to lightest colors. 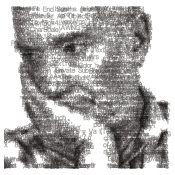 A self-portrait by artist Mike Lyon, in which the lines are formed of text, numbers and punctuation of varying scale and drawn in a single typeface, is one of many pieces of Lyon’s work that will be exhibited through April 16 at the Salina Art Center. 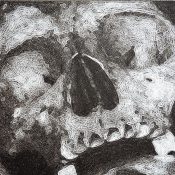 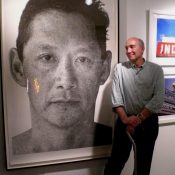 Kansas City-based artist Mike Lyon poses with one of his works. His new exhibition, “The XYZs of Post-Digital Gesture: Drawings & Prints by Mike Lyon,” runs through April 16 at the Salina Art Center

Bill North, executive director of the Salina Art Center, where an exhibition of Lyon’s work recently opened, said Lyon creates prints made with ink and paper and printed from wood blocks — a technique that spans more than 500 years — but combines that with digital technology and automated machine tools in creative and innovative ways.

“He’s giving these machines his proxy — it’s his work, his gestures,” North said. “The way they look comes from Mike’s mind and his hands, even though the last steps are automated.”

The exhibition, “The XYZs of Post-Digital Gesture: Drawings & Prints by Mike Lyon,” opened Jan. 18 and runs through April 16 at the Salina Art Center, 242 S. Santa Fe.

A reception for Lyon will be from 6 to 8 p.m. today at the Salina Art Center. Lyon will talk about his work beginning at 7.

Lyon’s innovations start with his use of a CNC (computer numerically controlled) router, a large industrial machine originally designed for commercial woodworking applications. Computer-coded instructions from Lyon direct the router’s bit along the X (length), Y (width) and Z (height) axes as it carves out designs from a sheet of wood on the machine’s bed.

Beginning in 2006, Lyon began retrofitting the CNC router with an ink pen, letting the computer-generated code guide the trace of the pen in the same manner he directed the router to carve his blocks. This has enabled him to create large drawings with many layers of intricate marks.

“Back then, no one was doing things like this with a CNC router,” North said. “Now you find them in nearly every art department.”

Lyon’s large works, many of them detailed portraits, require tens of millions of lines of code and can take up to several weeks of continuous drawing to complete.

“He draws layer by layer, one at a time,” North said. “To arrive at these things took a lot of trial and error, but it’s something in which he has total command.”

Lyon, who was born in 1951, has a bachelor’s degree in architecture and fine art/sculpture from the University of Pennsylvania and a bachelor of fine arts degree in painting from the Kansas City Art Institute.

In 1978, Lyon founded a computer and software design company, Grading Systems, best remembered for developing the Robo-Pic, an award-winning split-case order filling system. After selling that business in the early 1990s, Lyon began to pursue his art full time.

Since childhood, Lyon said, he’s been interested in Japanese culture and art and began to practice Japanese woodblock printmaking in 1996.

“He bought a three-story building at 20th and Broadway in Kansas City and got involved in making woodcut prints using traditional Japanese methods,” North said.

North met Lyon when the artist exhibited work at the Beach Museum of Art at Kansas State University, where North was then working as senior curator. North said he has been interested in exhibiting Lyon’s work at the Salina Art Center for some time.

“I was familiar with his work, and I was interested to see where he was now,” North said.

North said post-digital printmaking is so new that some people still misunderstand the complexity of the art Lyon is creating.

“Some would say using robots is a lazy way of drawing, but this is a lot more labor intensive than a lot of studio practices,” he said. “He’s using technology, but not at the expense of his own imagination.”

— Reporter Gary Demuth can be reached at 822-1405 or by email at gdemuth@salina.com.