The International Block Print Renaissance began in the last decades of the 19th century in Europe, as artists and collectors rediscovered the block print medium. Wichita played a major role in expanding this renaissance throughout America.

In 1922, the newly assembled Wichita Art Association presented American Block Print Makers as one of its first exhibitions. The exhibition inaugurated a century-long relationship between Wichita and prints. Beginning in 1928, Wichita hosted an annual juried block print exhibition. It continued through the 1990s and became one of the most important print competitions in America. In these same years, the Wichita-based Prairie Print Makers–a national print artist collective–was founded, and from 1931 through 1965 assembled annual exhibitions. Together, these events firmly established Wichita’s position in the history of printmaking and American art.

The International Block Print Renaissance Then and Now includes more than 140 prints. Together with its accompanying catalogue, the exhibition explores Wichita’s important role in the history of this international renaissance. It features prints by European leaders including Emil Orlik, Walther Klemm, Henri Riviére, Frank Morley Fletcher, John Platt, Allen Seaby, Jules Chadel, Hans Neumann, and Auguste Lepére. It also includes works by the Japanese masters Katsushika Hokusai and Ando Hiroshige. These European and Japanese masters influenced and inspired the American printmakers featured in the show, including B.J.O. Nordfeldt, Ernest Watson, Helen Hyde, Frances Gearhart, Gustave Baumann, and C.A. Seward. Many of these artists were chosen for the initial 1922 exhibition and the annual print shows that followed.

The International Block Print Renaissance Then and Now also celebrates the ongoing vigor of this renaissance through the work of 12 contemporary printmakers–Jean Gumpper, Mark Sisson, Mike Lyon, Karen Kunc, Leon Loughridge, Gordon Mortenson, Micah Schwaberow, Walt Padgett, Michelle Martin, Tim High, Louise Fisher, and Linda Lee Boyd. These artists—like their predecessors who worked a century before–continue to push the artistic possibilities of the block print medium. Join WAM in celebrating the 100th anniversary of block prints in our city, then and now.
Image of black boats floating on blue water, with a skyrocket exploding from the center front in a stripe of red, blue and white in the blue sky. The moon is centered at the top of the image. 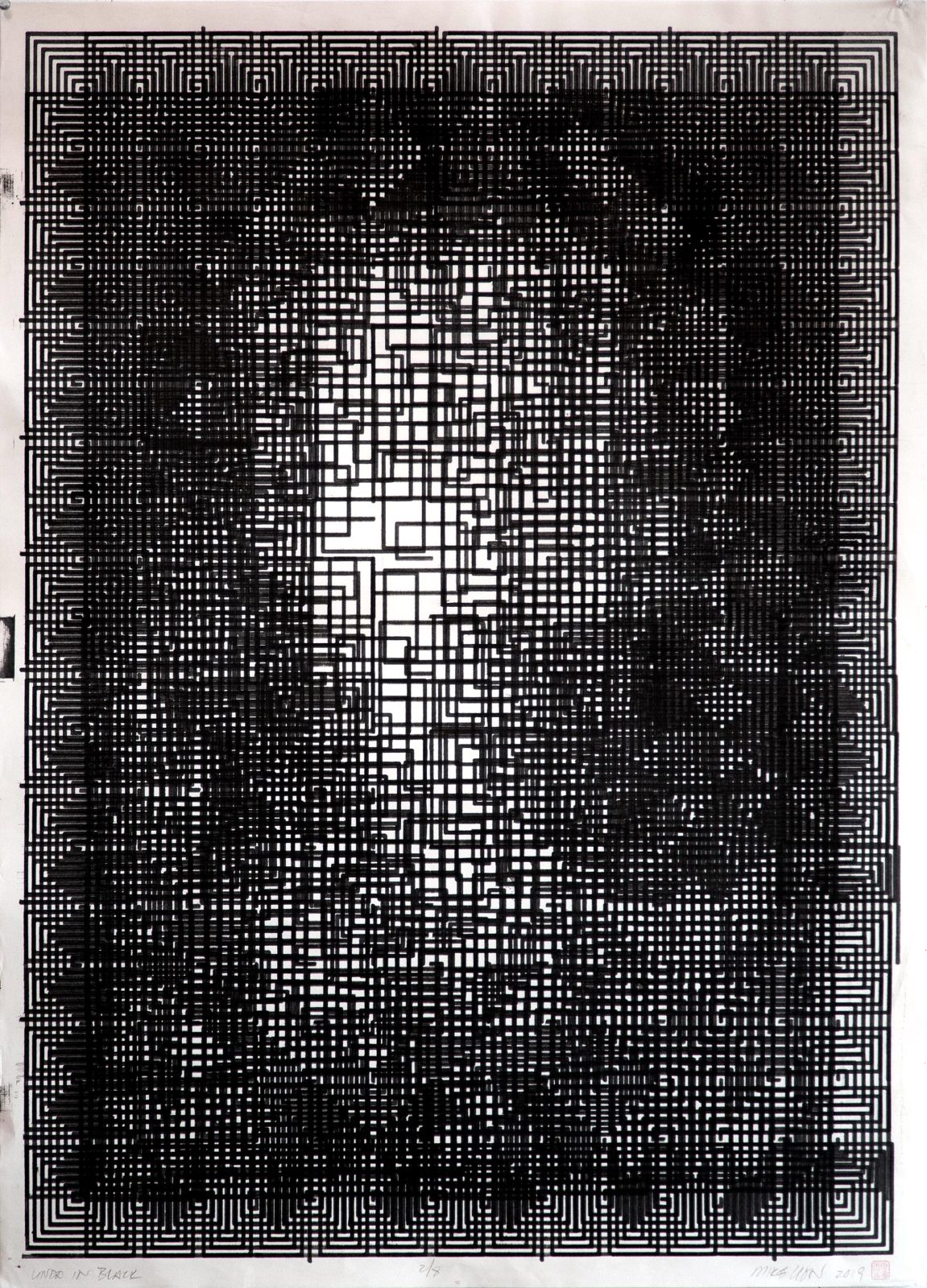 "Linda in Black" 2019, 41 x 29.5 inches, Mokuhanga - Japanese technique woodcut from four blocks on handmade hosho by Iwano Ichibei in an edition of eight 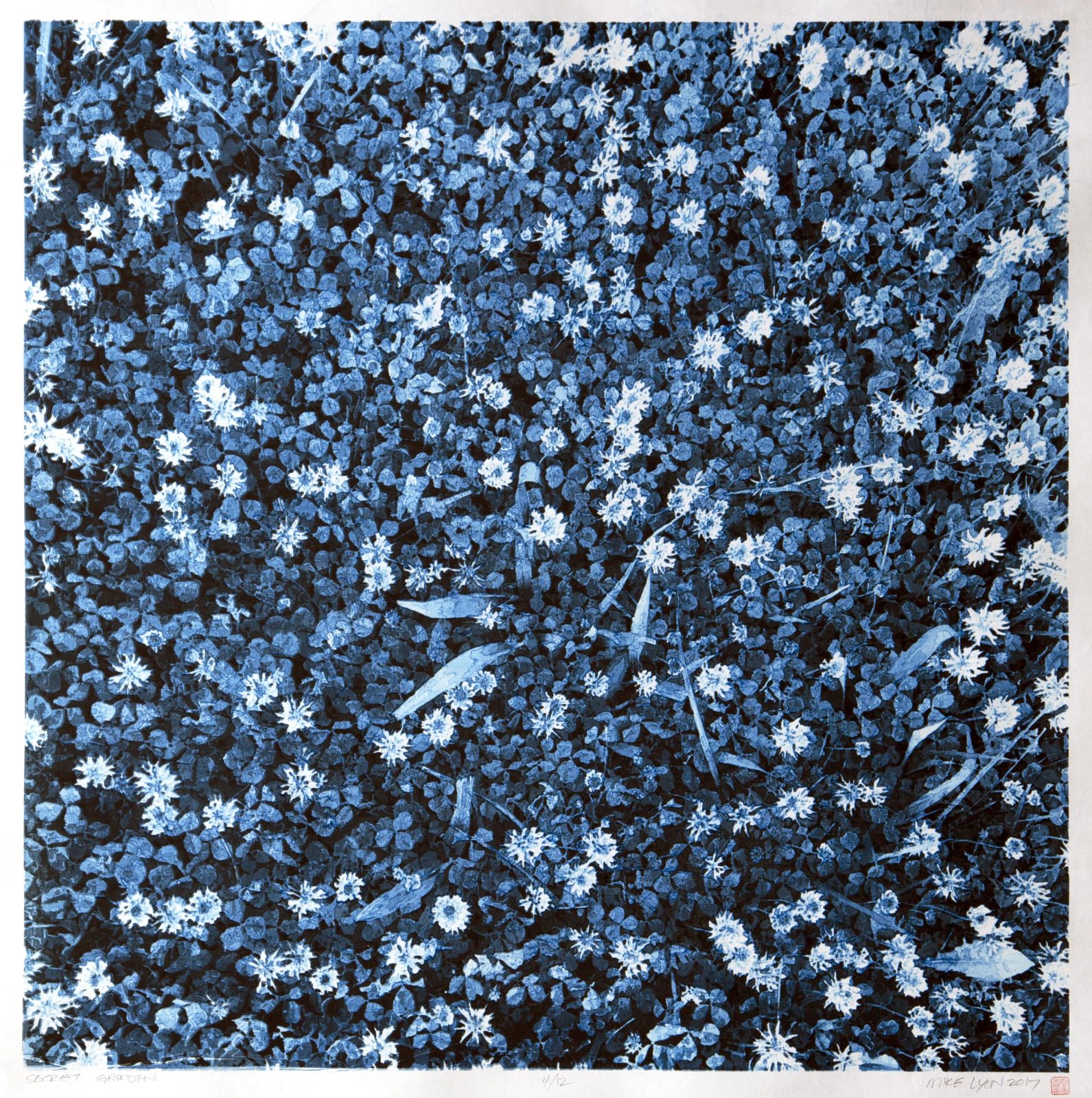 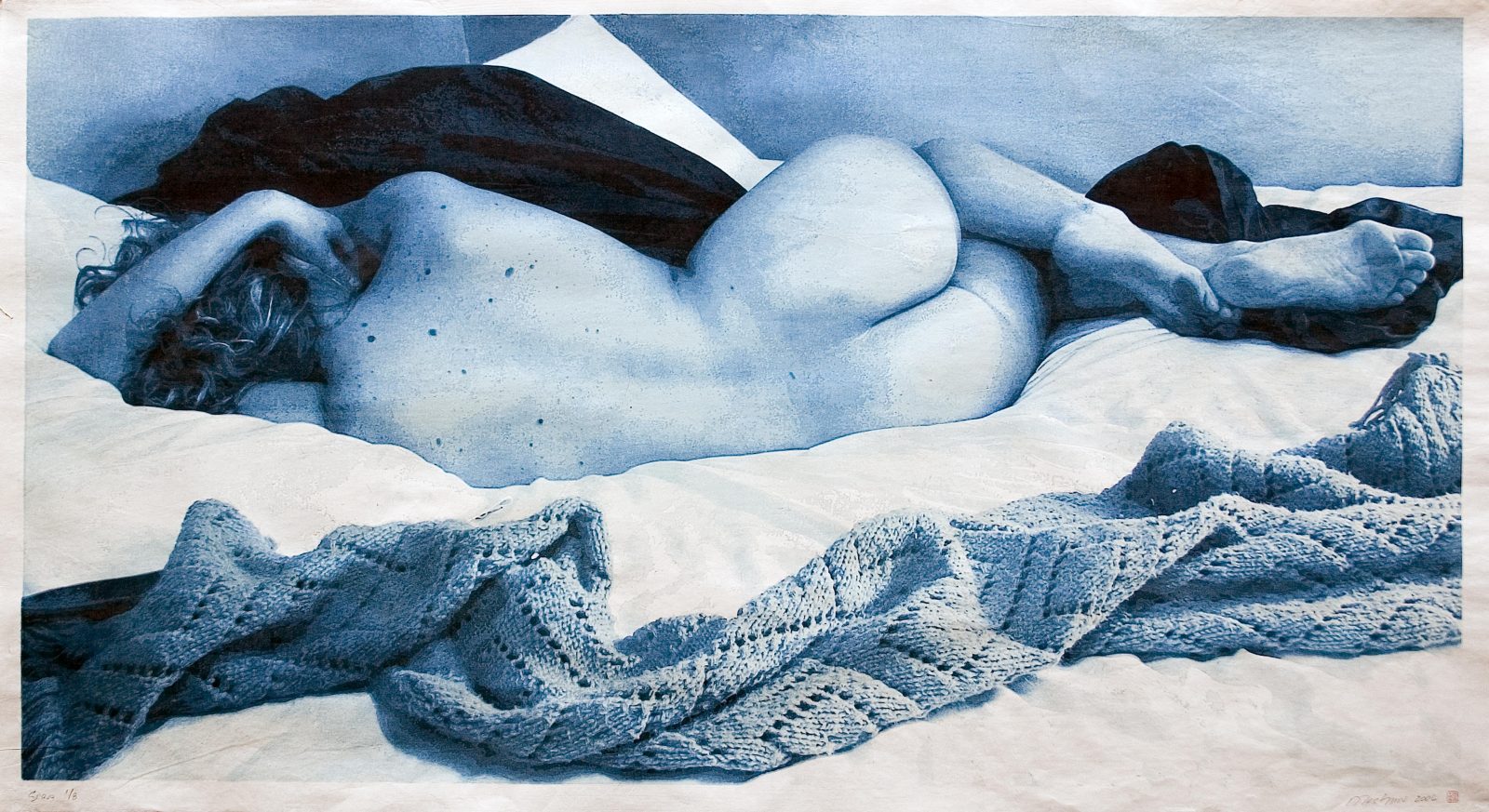 Three of my mokuhanga (Japanese technique woodblock prints) were selected for the exhibition. The museum purchased the “Secret Garden” print (top right above). June 3 there was a fine dinner at the home of a museum patron. June 4th we toured the exhibition and enjoyed a wonderful print symposium followed by a banquet. Fellow printmakers Walt Padgett, Jean Gumppers, and Leon Loughridge were there and it was great to meet one another after years of admiring each others’ work! 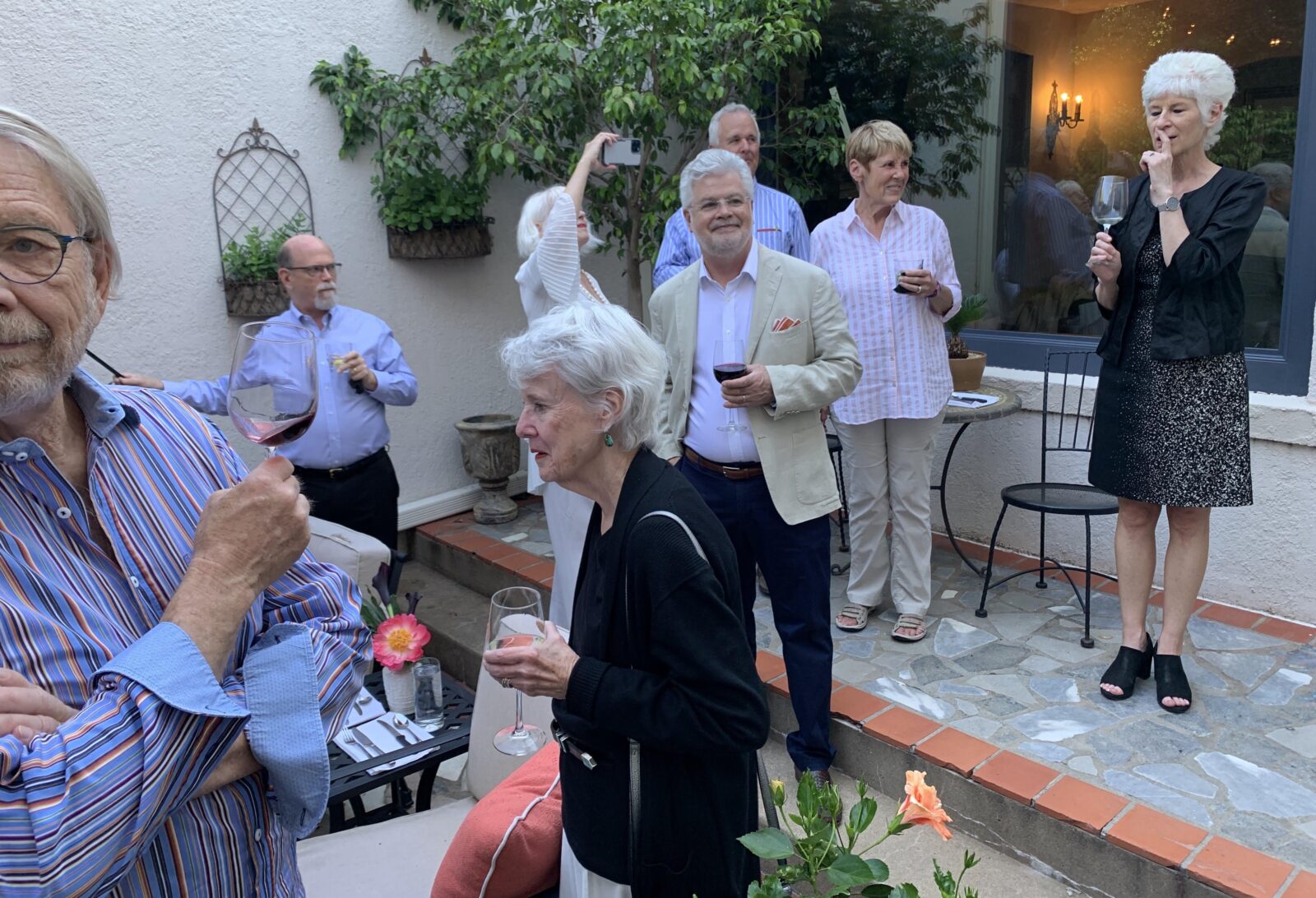 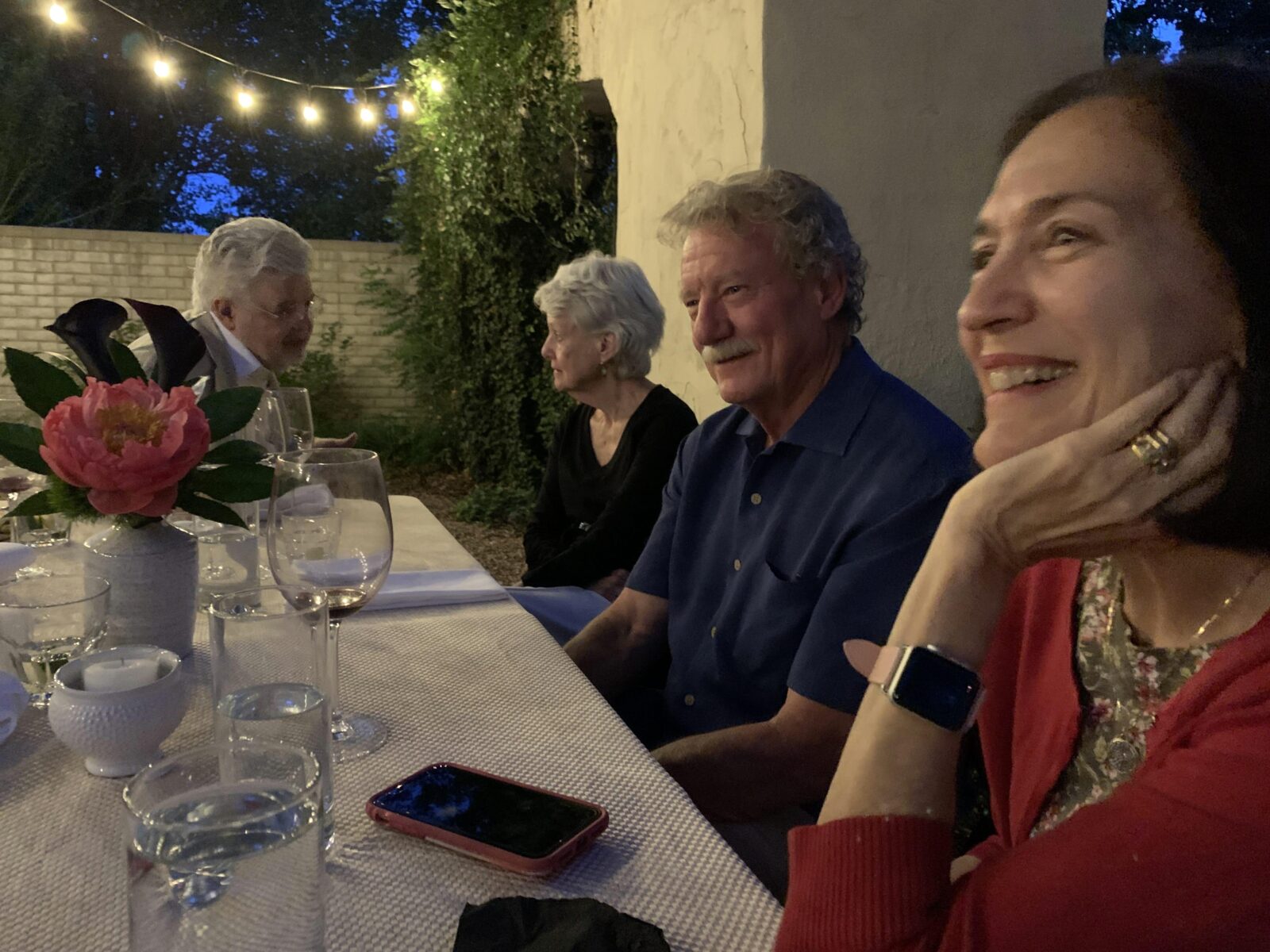 Linda Lyon on the right with Barbara Thompson and her brother 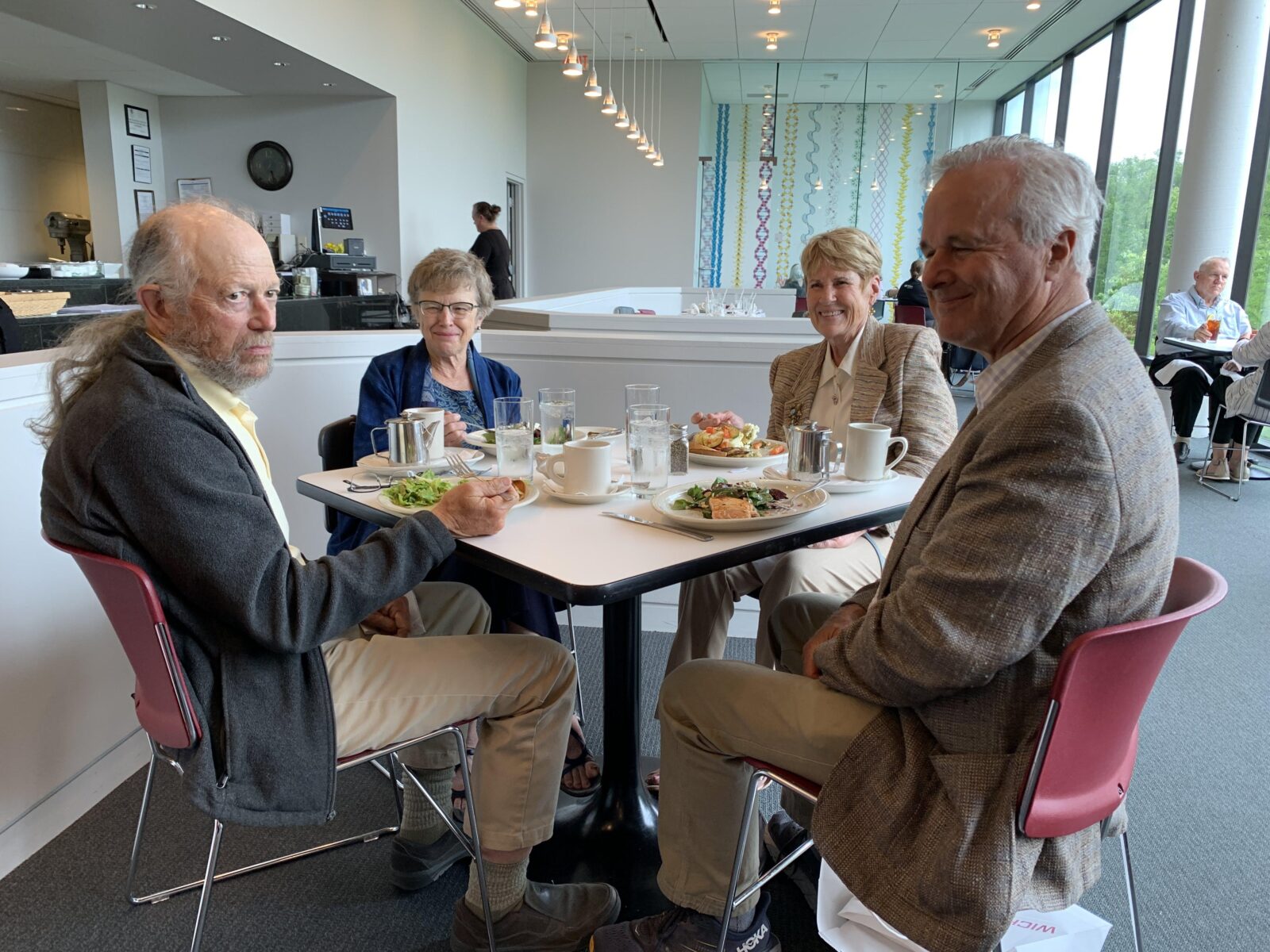 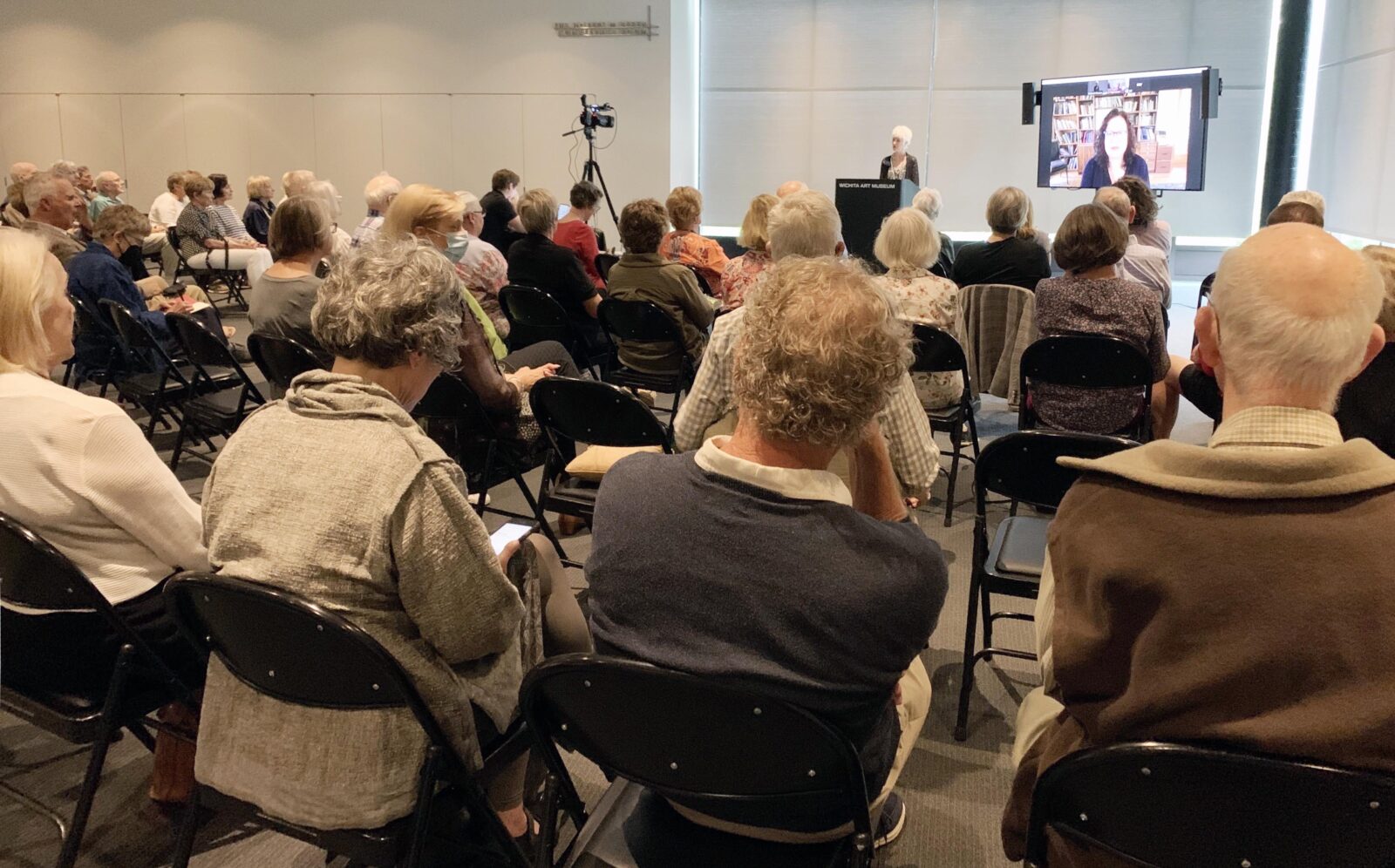 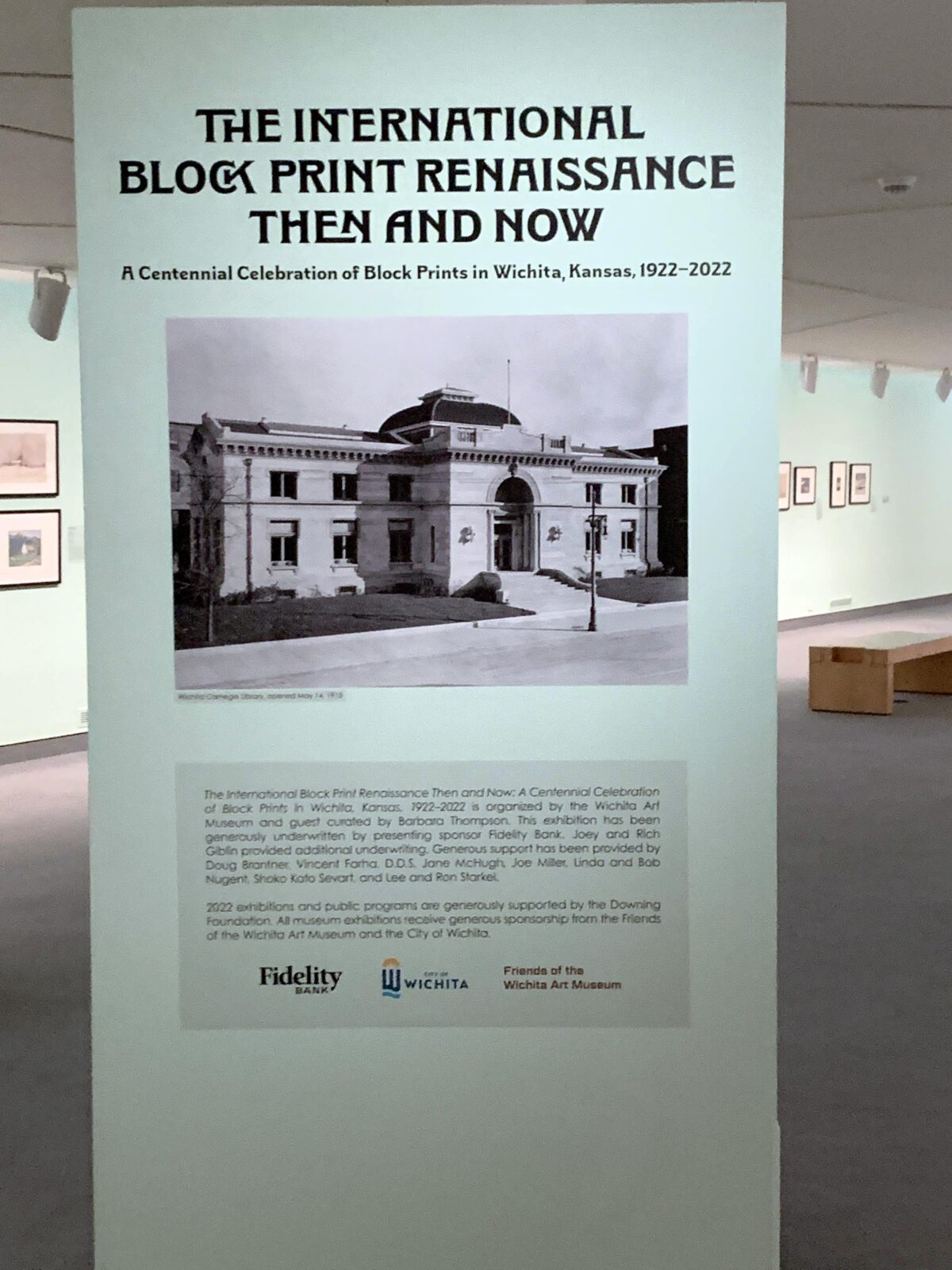 Then and Now entrance information 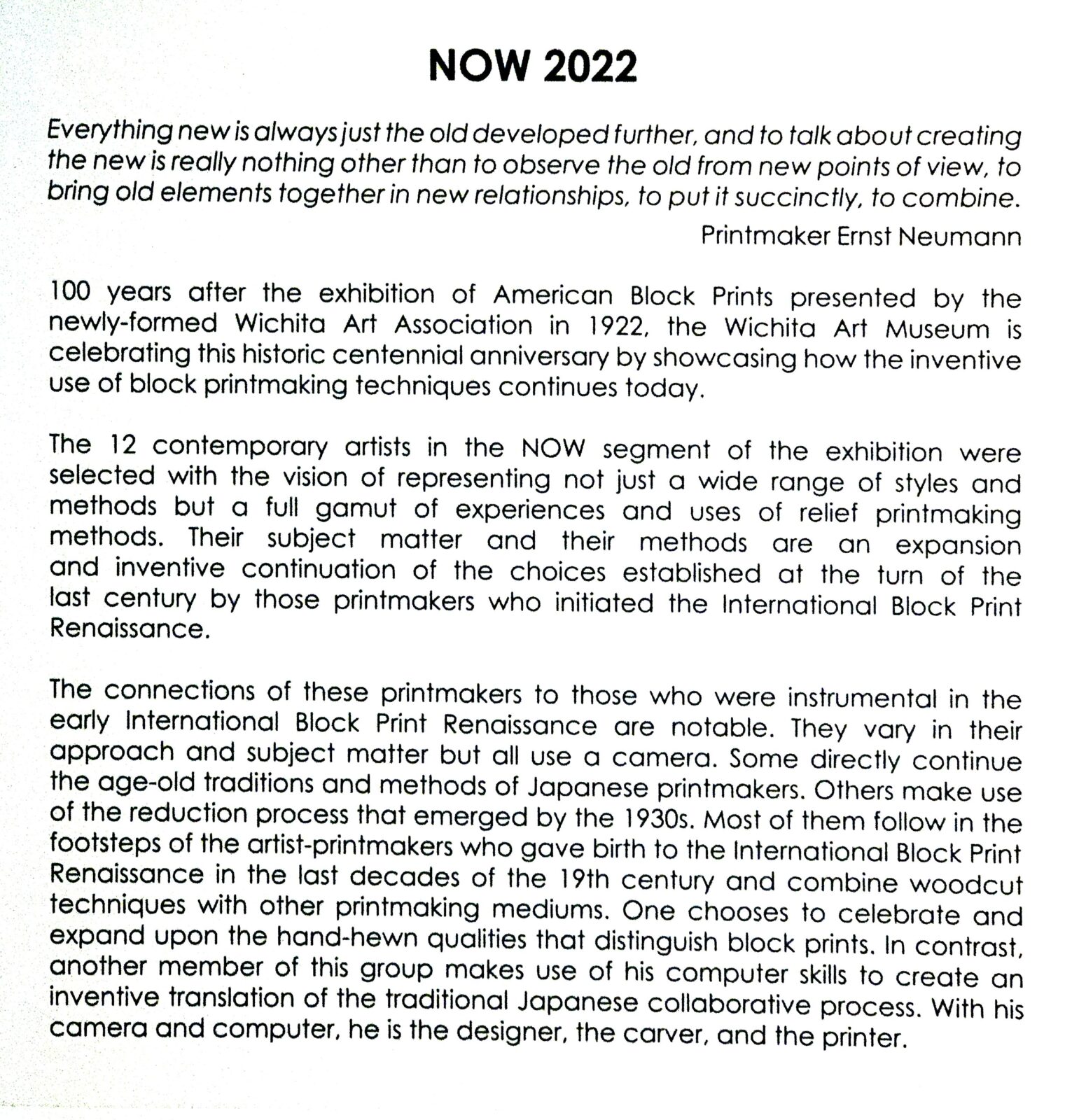 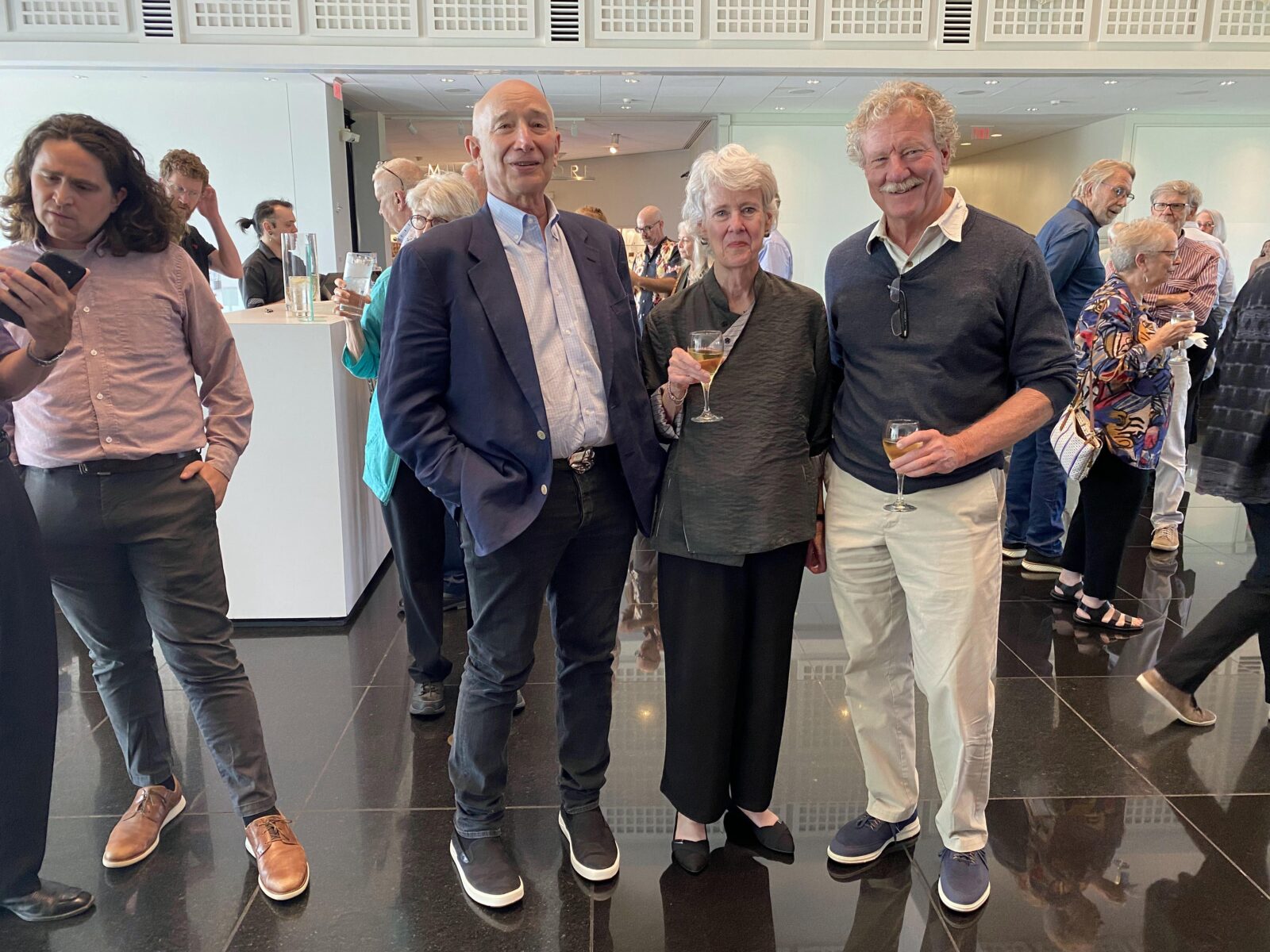 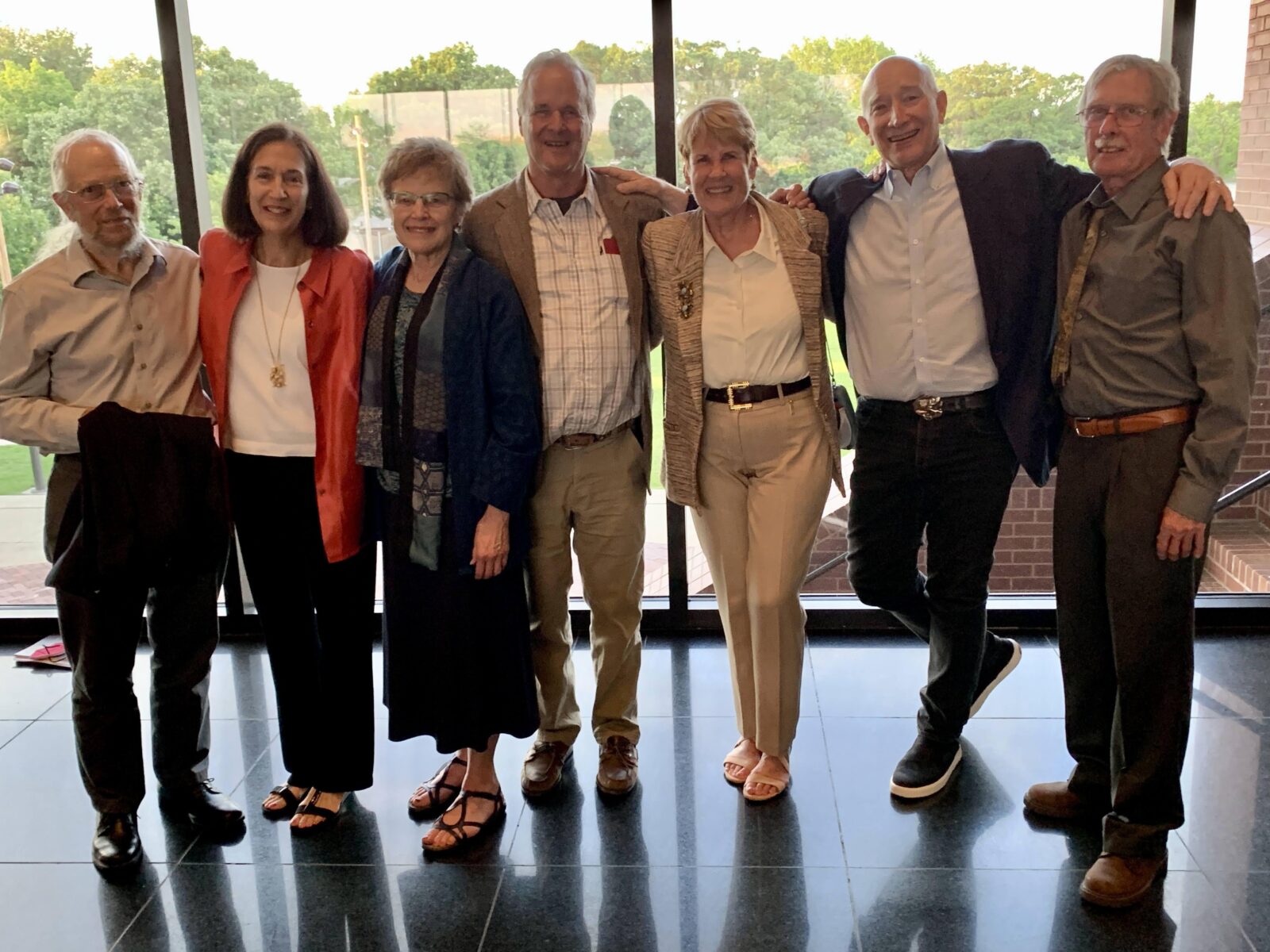 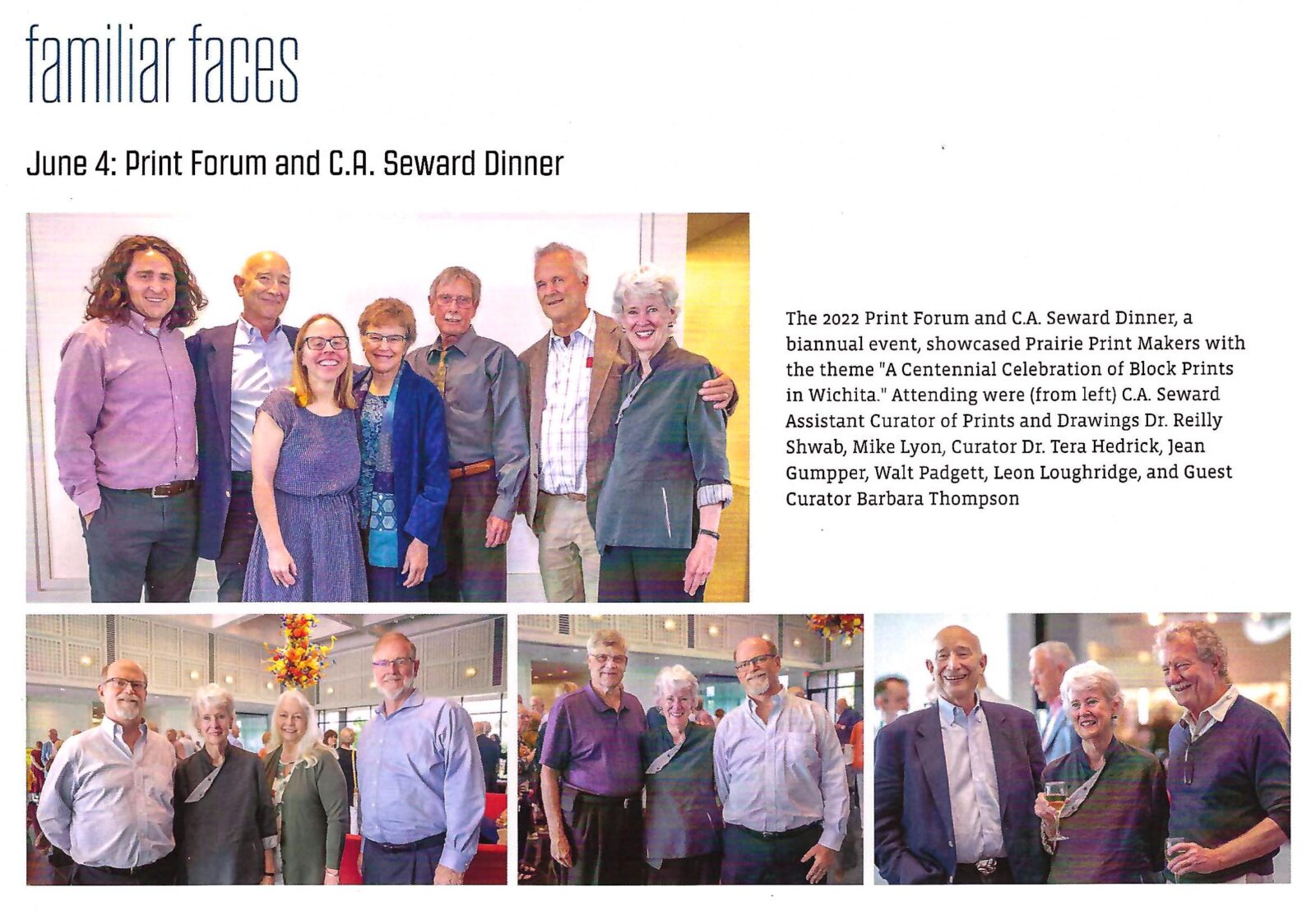 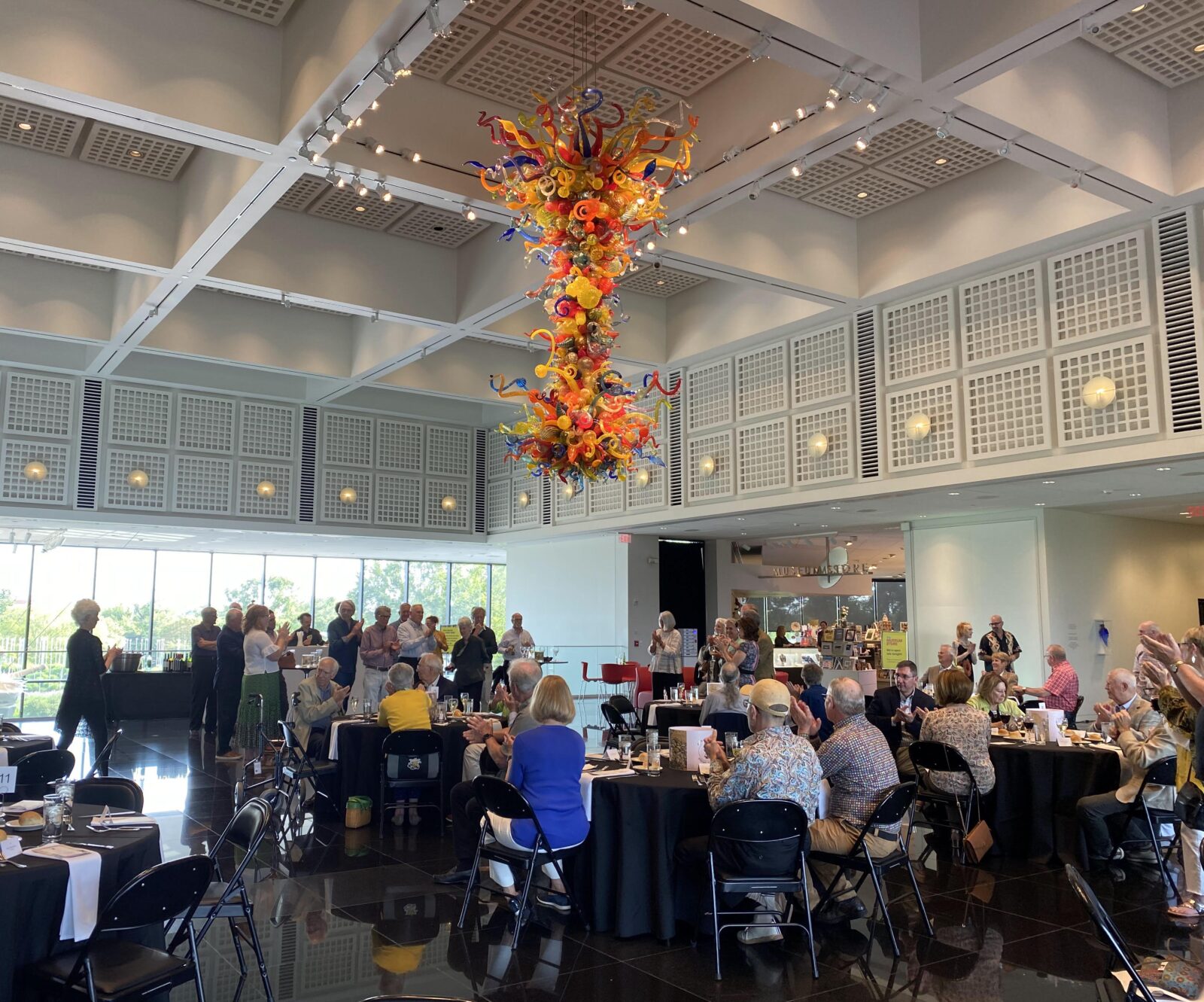 The International Block Print Renaissance Then and Now: A Centennial Celebration of Block Prints in Wichita, Kansas, 1922–2022 is organized by the Wichita Art Museum and guest curated by Barbara Thompson.

2022 exhibitions and public programs are generously supported by the Downing Foundation. All museum exhibitions receive generous sponsorship from the Friends of the Wichita Art Museum and the City of Wichita.